Set up the layout 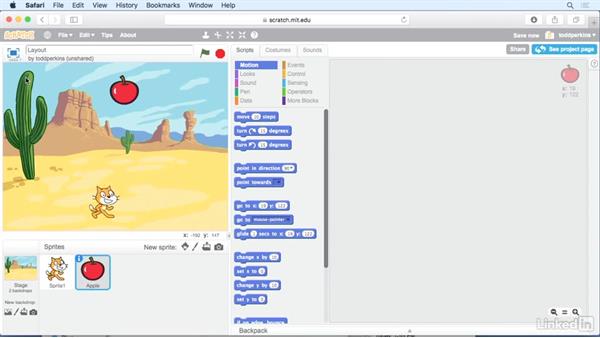 Before you write the scripts for your game, you'll need some objects on which to write them. This movie shows how to make the layout for the game, including adding the backdrop, adding the sprites, and placing the elements on the screen in the correct sizes and positions. When the app's layout is setup, you're ready to start writing the logic for you game with scripts.

- [Voiceover] Let's start by just getting the assets…that we're going to use, laid out on the screen.…So I'm going to start by changing the backdrop.…So, I'll click the button to get a new backdrop…from the library.…And in here, I'm going to…scroll down and I'm gonna find the desert background.…Now of course, if you're making this game on your own,…it doesn't really matter which background that you use,…so if you choose to use the gingerbread background instead,…that's fine.…So I'm going to click okay,…and then I'm going to move the cat down a little bit…and I'm going to shrink him,…he's a little bit too big…so I'm going to use the shrink tool,…at the tool bar in the top of the screen…and shrink him down just about that much,…that looks good to me.…

So it doesn't really matter where you leave him,…but I'm gonna leave him right about there.…Now we're going to need some apples and some rocks.…So I'm going to get a new sprite from the library…and I'll grab an apple sprite.…And this will be our template for apples…

Video: Set up the layout