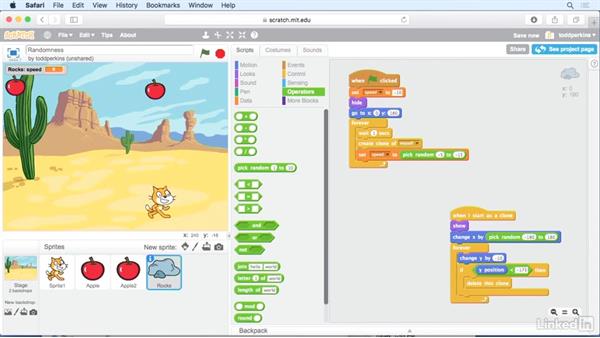 Randomness adds variety to your games. When developing a games, you will often want to add some element of random chance whether it be in obstacles, enemy artificial intelligence, or some other feature. This movie shows how to add some randomness to the speed of the rocks falling down from the top of the screen in our game.

- [Voiceover] Currently, all the rocks…fall at the same speed.…But what if we wanted to add…an element of randomness to make them go at different speeds…each time the rock falls down?…Let's look at how to do that.…I'm going to head over to "data"…and I'm going to click on "Make a Variable."…Keep in mind that I have the rock selected.…So you definitely want to be on the rocks here…and then you want to click "Make a Variable."…This is going to be for this sprithe only.…And the variable name is going to be "speed."…So do that and click "OK."…So now we have a speed variable.…