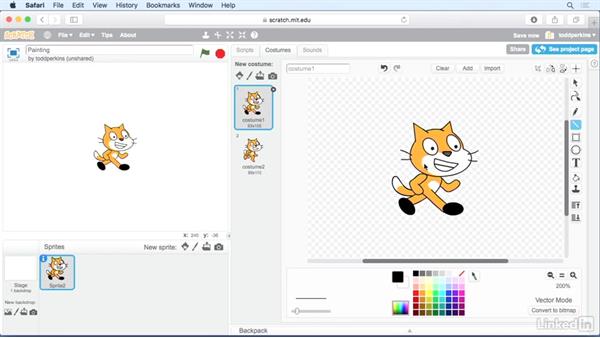 Scratch has two drawing modes- vector and bitmap. Both drawing modes allow you to create artwork, but each serves a different purpose. In this movie, see how to use the vector drawing mode, and the key differences between vector art and bitmap art. You will also see some examples of why you might want to choose one drawing mode over the other.

- [Voiceover] Painting applies to both…backgrounds and sprites.…Let's say we wanted to paint some…shoes on our cat right here.…To do that I'm going to have my sprite selected…in the sprite list, and then I'll head over to costumes,…and now I have costume one and costume and costume two,…so I'm going to leave costume one selected,…and I'm going to zoom in by clicking the Zoom button…right here, so I have a nice close view of the cat.…And now what I want to do is draw some shoes on the cat.…You may notice that this looks a little bit different…than what we looked at earlier.…

Before we had the tools on the left side,…and they were a little bit different…from the tools on the right side.…That's because right now we're in vector mode.…If you're unfamiliar with vector or bitmap,…you can think of it as vector being a mode…where you draw using shapes, and bitmap is…a mode where you draw using pixels.…Pixels are the tiny rectangles that…produce images on a computer screen.…

On many computer screens there are a million…