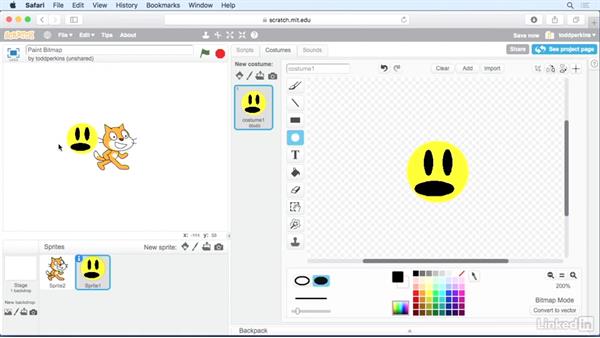 Scratch has two drawing modes- vector and bitmap. Both drawing modes allow you to create artwork, but each serves a different purpose. In this movie, see how to use the bitmap drawing mode, and the key differences between vector art and bitmap art. You will also see some examples of why you might want to choose one drawing mode over the other.

I wanna point out that when you're drawing with a bitmap…the tools are on the left side,…and if you look at the bottom right of the Editor here…you're going to see that we're in Bitmap Mode.…But if you wanna change to Vector Mode,…watch where the tools go.…So now we have Vector Mode, and the tools go to the right,…so we do have a different set of tools…on the left and on the right.…So let's go to the left by clicking Convert to Bitmap,…and you may notice that we also have…