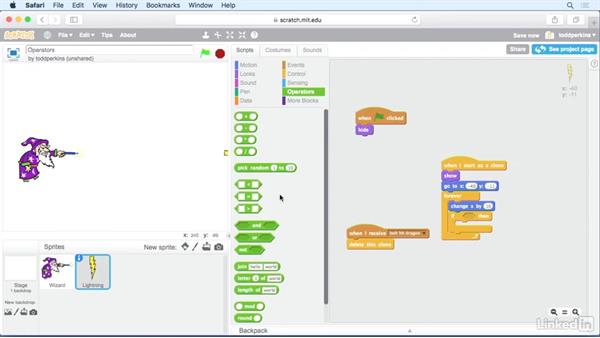 Operators are used in Scratch to determine one value compared to another, or to generate a random value. Using the Operators scripts, you can check if one value is greater than, less than, or equal to another value. This information can then be used in your Control script blocks to choose whether to proceed in your project or not. See how Operators scripts work in this movie.

- [Voiceover] Operators allow you some extra flexibility…with your If Blocks.…For example,…instead of something being true or false,…or yes or no, or the answer to a question,…you can check to see if something is greater than…or less than or equal to something else.…We can actually even get random numbers…using operators,…we can perform math, like addition, subtraction,…multiplication and division.…We can combine multiple statements that are true or false…using an And statement,…so both of them have to be true…in order to move through the If statement.…

We can use Or, so either one of them can be true…to go through the If statement.…We can use Not, so it has to be evaluated as False…to go through the If statement.…We also have options to join two values together…that are Text.…So you can use a lot of different kinds…of data or information using these operators.…As an example, I have this wizard on the screen…and when I click the wizard, he shoots a lightning bolt.…Notice that it gets stuck at the right edge of the screen.…