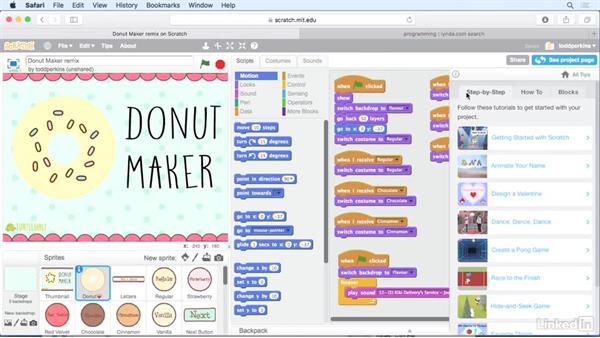 Join Todd Perkins for an in-depth discussion in this video Next steps, part of Learning Scratch.

- [Voiceover] Well, that's the end of this course.…So, where do you go from here?…If you asked me, there are two different paths.…You can keep going down the Scratch path…and be an expert Scratch user.…If you're going to stick with Scratch,…what I recommend doing is looking at some…of the featured projects or finding some other projects…on the Scratch site and then remixing them.…For example, this Donut Maker project.…You can go to this project.…If you want to create your own version, you can click…on See Inside.…

When you click on that, you can see how the project…was created, all the sprites that were used,…how was organized.…And you can click the Remix button.…And if you want to remix it, you can take this project…and you can edit it yourself.…Here are some suggestions for remix in this app…that you could follow.…So, I'll click OK.…And now I've created my project Donut Maker remix.…And I could modify these.…I can change anything I want in this project.…

So, in sticking with Scratch, you can remix…existing projects, you can learn how people…