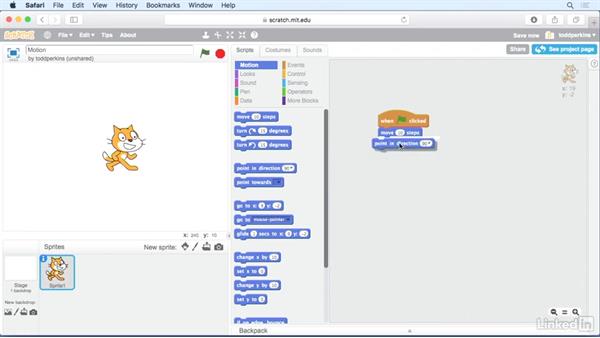 Scratch's scripts are grouped according to their functionality. The motion scripts deal with objects moving, and their current position on the screen, as well as their rotation. This movie discusses the basics of working with the motion scripts in Scratch, and shows how you can add motion scripts to your sprites in order to create animations in Scratch.

- [Voiceover] Scripts are what give life to your apps.…Using scripts you can apply movement to your characters.…You can respond to events like when a character is…clicked on, or when a button is pressed on the keyboard.…Or, when your mouse moves.…You can add sound effects.…And, that's what's going to give the life…to your applications.…Now, in order to apply scripts you're going to need…to be on the scripts panel.…You're also going to need to have the sprite…selected that you want to apply scripts to.…