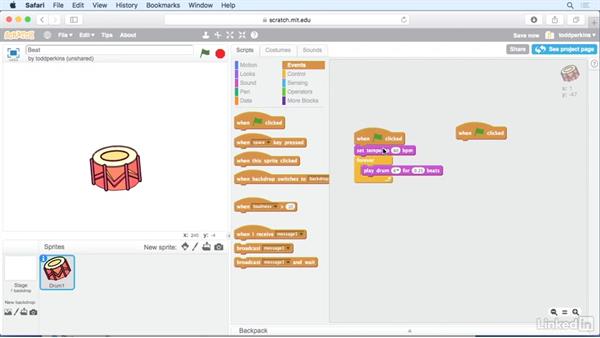 Scratch actually allows you to create not only sounds, but music as well. Using the scripts built into Scratch, you can make a song, and if you want, a looping beat. This movie demonstrates some of the key concepts to understand when working with beats in Scratch. Topics inlcude how to make a beat loop properly, how to calculate how long each note should be in a loop, and how to apply a loop script.

- [Voiceover] The sound options in Scratch allow…you to do even more than just play simple sound effects.…If you look at the play drum and play note settings,…you'll notice that they're done for a certain…number of beats.…Now, using these numbers and using math,…you can actually create a looping beat for a…background music for one of your apps.…For example, if we wanted to start playing a beat…when the green flag was clicked we can drag that…event script out, then head back over to control.…

Now, of course, you can choose anything you want.…But, I'm going to choose close hi hat here…