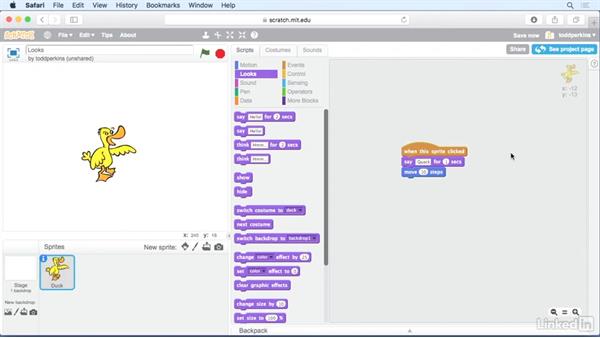 The Looks scripts deal with the appearance of your Sprites. Appearance options that can be modified with Looks scripts include color, size, and costumes. Looks scripts also contain options for having a sprite say or think something. Using this scripts, you can change how your sprites look and what they say in your projects. In this movie, see the basics of Looks scripts and how to use them.

- [Voiceover] The Looks scripts are made for changing…the look of your Sprites.…You can make them say something…with a talking bubble,…or think something with a thinking bubble.…You can show or hide your Sprites,…you can change their costumes,…you can change the backdrop,…you can change colors, et cetera, et cetera.…So let's look at how these actions work.…Let's say I want the duck to quack.…I'm going to go to Events and then I'm going…to drag out when this Sprite clicked.…So this is an event that's going to trigger…when we click on this particular Sprite.…

Let's go back to Looks and then we want to run a script…when that event occurs.…So I can click and drag this one that says…Say Hello for 2 Seconds.…I can drag it right underneath when the Sprite clicked.…You'll see that thick white line and then you can…release the mouse and it should…snap into place.…Now there's a difference between Say Hello for 2 Seconds…and just Say Hello.…When you choose just Say Hello,…the talk bubble is going to appear on the screen…and it's going to stay there.…