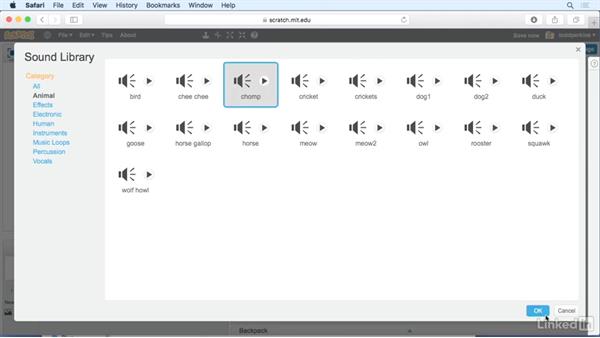 Sounds can be loaded from the sound library, recorded from the microphone, or uploaded from your computer. Once these sounds are added to your Scratch project, you can play them whenever you want using a script. This movie demonstrates some of the basic concepts in working with sounds in Scratch, including how to load sounds in from the library.

- [Voiceover] Let's say you wanna load…a sound into your app.…On the screen I have a lion right here,…and when I go to the sounds scripts,…one of the options is to play sound meow.…So I'll click on this…(meow sound)…and that sound quite doesn't quite go well with a lion,…maybe something more like a roar, or a growl or something.…Well, if you click the drop down next to meow,…meow is actually the only sound that you see,…so to get more sounds,…you actually have to head over to the sounds tab,…and if you want this meow here,…you can just click on the X to get rid of it,…which I'm going to do,…and then we can choose a sound from the library,…record a new sound using the microphone on your computer,…or you can load a sound from a file on your computer.…