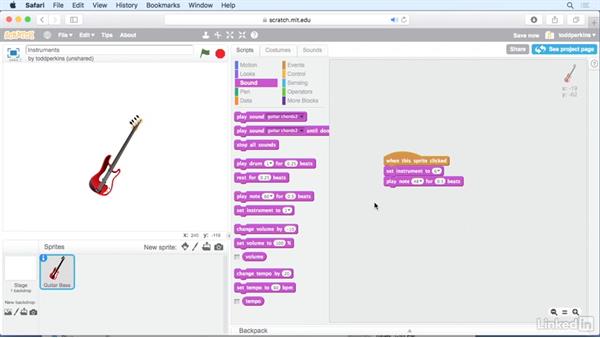 Instruments in Scratch allow you to change the tone of a note that is played using a sound script. Scratch has several different types of instruments built in, and using the notes in Scratch you have access to plenty of notes- enough to write or to cover actual songs! This movie shows how to work with various instruments in Scratch, and how to add a little bit of randomness just for fun.

- [Voiceover] Scratch also allows you to create…sounds from instruments.…You can create instrument sounds…in the sound scripts.…Those are found inside the set instrument…and play note scripts.…Notice that it says beats for measuring this,…just like it says for the drums,…so you can use these in a loop.…However, I would mention that…when you use instruments in a loop,…what I have noticed personally…is that it doesn't play perfectly…like the drum beats do.…

So it's a little bit harder to sync up…an instrumental loop…than it is to sync a drum loop.…So just keep that in mind.…Usually this is going to be good…for creating something where you…click on this guitar for example…and then you hear a note.…So actually let's do that.…Let's go to Events…and then we'll drag out when this sprite clicked…and then go back to sound…and what we wanna do is…play a sound.…So I'm going to drag out set instrument to…and I'm going to change it from one,…which is a piano,…to six, which is a bass.…

Now of course, you can choose…any instrument you want here.…