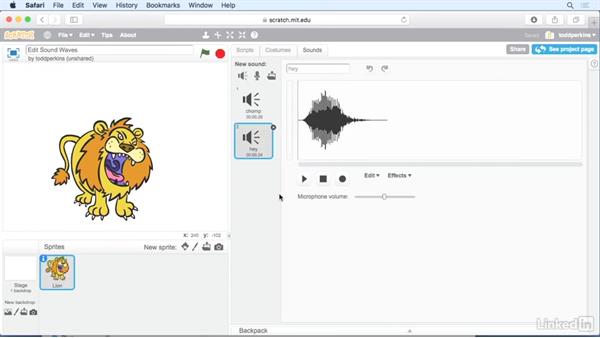 Sound waves can be edited in Scratch. Why would you want to edit a sound wave? These waves give you control over effects, like fading in, fading out, making a sound louder, making it quieter, making sounds silent, and more. In this movie, see how to edit the sound waves of a sound object in Scratch, and how to use the behind-the-scenes filters to make changes that aren't directly shown in the Scratch interface.

Under edit, you can choose to cut, copy, paste,…delete or select all of a sound wave.…For now I'm not going to do that…but we can also go to the effects section…and we can make this, for example, louder.…So only the part that I have selected has become louder.…Now if I want to play the whole thing…I need to make sure that I don't have…any of it selected, so I'm going to click a few times…until I see just a solid line…and then I'm going to click again…to put the solid line at the beginning of the sound…