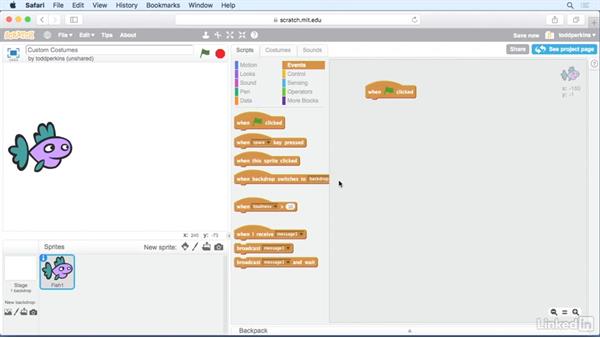 Costumes can be drawn using both bitmap and vector graphics. In this movie about drawing vector costumes, see how to create and modify cosutmes of vector sprites using the built-in drawing tools. Using these tools, you can change colors of parts of sprites, remove parts of sprites, or add your own custom elements to the sprites that you're working with.

- [Voiceover] So let's say I want to do an animation…on this fish, and I'm going to make the fish swim…across the screen.…And I want the fish, while he's moving,…to move his tail and to move his fins.…Well, from what we've done so far,…we can select the fish and head over to Costumes…and just change between the existing costumes.…However, the fish doesn't come…with a built-in second costume.…So we actually have to create it ourselves.…So let's look at how to create…your own custom costumes…and apply them in an animation.…

So I'm going to right-click this existing costume,…and I'm going to choose Duplicate.…So now I have two fish costumes:…fish1 and fish2.…Remember, if you create too many…you always have the X button at the top right…to get rid of that costume.…For now, I don't need to do that.…So let's select fish2.…And you may notice, if you click on fish2,…you're going to have the whole fish selected.…This fish was made in vector mode.…

You can see that at the bottom right of the screen.…Also, we see that the tools are on the right,…