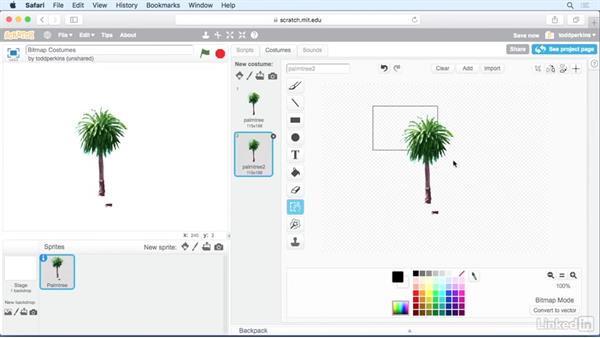 In addition to drawing costumes using vector graphics, costumes can be drawn with bitmap graphics as well. For bitmap sprites, that's your starting point. In this movie, see some of the challenges of working with bitmap costumes as well as the benefits. Create a custom animation of a bitmap sprite and watch it animate using a script.

- [Voiceover] So let's say you want to animate a bitmap…using its costumes.…Unlike in vector mode…bitmap mode does not allow…you to select individual shapes.…Because a bitmap is made…with pixels, rather than shapes.…So let's look at some of the options…that you have, when editing a bitmap,…so that you can make an animation.…Now our goal here is to make the palm tree…sway back and forth.…So I have my palm tree selected…and in the costumes tab,…and I have my costume selected.…

So I have my selection,…and then I'm going to click and drag it…