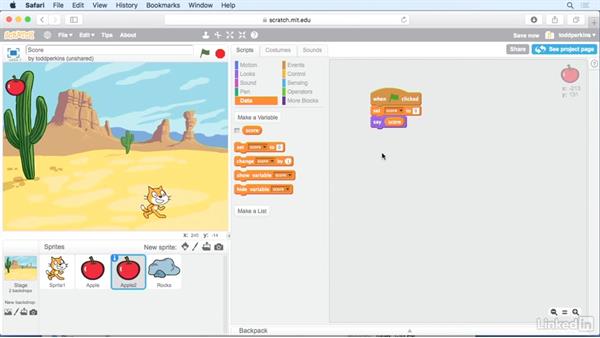 Displaying a score gives the player feedback on their progress in the game, including a way to track their personal best as a challenge to improve in the next match. This movie shows how to create a score in a game, and how and when to add to the score. Creating a score is done by making a score variable and adding to it when the player catches an apple.

- [Voiceover] To wrap up our game, we're going to keep track…of how many apples the player catches…and display that information on the screen.…Let's head over to the Apple2 sprite.…So, what we're going to do here is just,…create a variable, that's called Score…that's just going to keep track…of how many apples were caught.…So we go over to Events and then…I'll drag out a when green flag clicked.…Now, in here we're going to set our score variable to 0.…So let's go over to Data and create a score variable.…

So, we go to make a variable,…and this could be For all sprites or For this sprite only.…It doesn't really matter.…So I'm going to leave For all sprites as the default.…So this can be accessible by other sprites…if we ever wanted to do that.…Now, for our game right now,…we're not going to make this accessible by other sprites.…But if you ever wanted to remix this,…you could do that as well.…So I'm going to add the variable named score…and then click OK.…So there's our score variable and we don't want it…showing on our screen like that,…