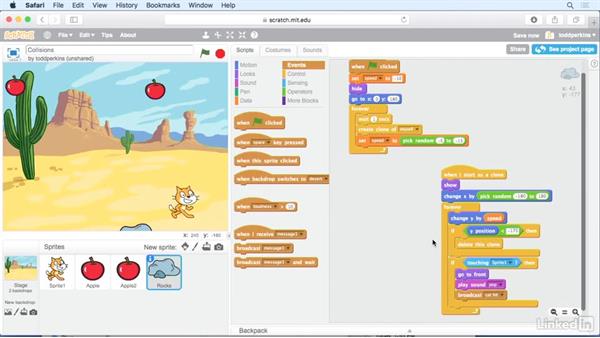 Collisions allow you to detect when one object runs into another, which is one of the most vital parts of most games. In our game, we want a collision to be detected when the rock lands on the cat's head. When that happens, we want the game to be over and the player to lose the game. This movie shows how that is done for our cat game.

- [Voiceover] So right now, the rocks move…and you can control the cat, but…there's no connection between…the rocks and the cat.…So what we're going to do…is add some code to detect collisions…between the rocks and the cat,…and stop the game when those collisions happen.…So, to do that, I'm going to…start in the rock so I have…the rock sprite selected,…and I'm in the scripts panel and I'm…looking at the rock scripts.…So what we want to do…is check to see in our forever loop…if the rock is touching the cat.…

So, we'll go over to control…and find if/then and just drag that out…underneath the if/why position block and…inside the forever loop…and then we'll head over to sensing.…And we want to see if…it's touching another object.…So I'm going to drag out this touching 1…and then change this in the dropdown…to sprite 1.…So, if it's touching sprite 1,…then what we want to do is…bring the rock to the front.…We want the rock to be…in front of the cat in that case,…and then we want to…basically stop the game.…