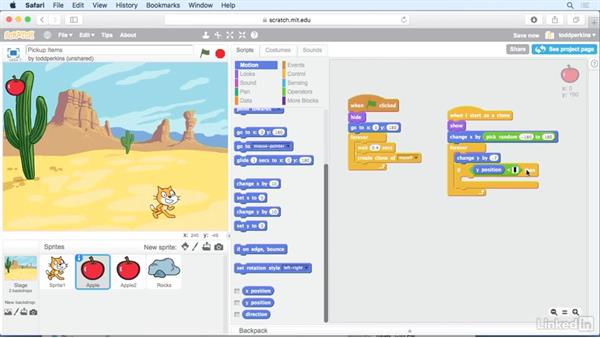 - [Voiceover] Our next step is to make the apples…fall down from the sky like the rocks,…except for the cat will be able to pick up the apples…instead of getting crushed by them.…So let's click on Apple,…so this is the apple that we want to apply…these scripts to.…And we're going to apply the same scripts as the rocks.…So I'm going to move a little bit faster…than I did with the rocks.…So we'll start over in Events,…and then drag out a When Green Flag Clicked action.…And then head over to Looks,…drag out a hide.…

Remember we want this to hide, we wanna center it,…and we wanna place each apple that's created as a clone…in a random position.…So then we'll go to Motion,…go to x, y,…x will be zero and 'y' will be 180,…we'll put it at the top of the screen.…Then we want a Forever Loop,…so I'll drag one out right there,…and we wanna create clones.…And I wanna create a clone not at the same time…as the rocks.…So instead of every one second,…I'm going to use every 0.4 seconds.…

So that way, the apples and the rocks…aren't going to be created at the same time.…