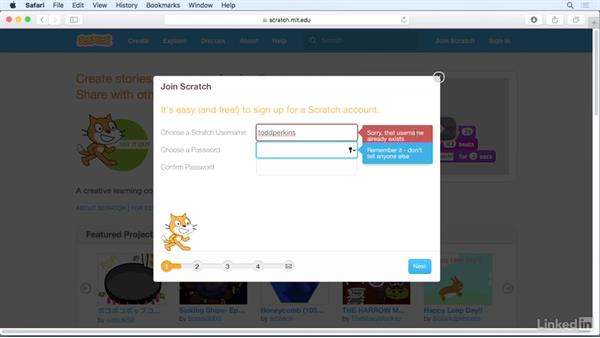 - [Voiceover] In order to make projects in Scratch…you're going to need to create a Scratch account,…and as I mentioned earlier,…creating a Scratch account is free.…So you can click the button here to join Scratch…or you click the button over here,…so find the button to join Scratch…and then you need to create a username.…So I can create a username for example,…type in a password and right now…it's saying that username already exists…because that's actually my username for Scratch…so you have to type in a password, confirm the password…and then click Next, and from there…you'd be asked to share the…email address of an adult…and if you are an adult, you can just…go through that whole process…and confirming your email address enables some…other features in Scratch but just create your username,…your password, follow the steps…by clicking through the Next button…and you can create you Scratch account…and start building apps using Scratch.…