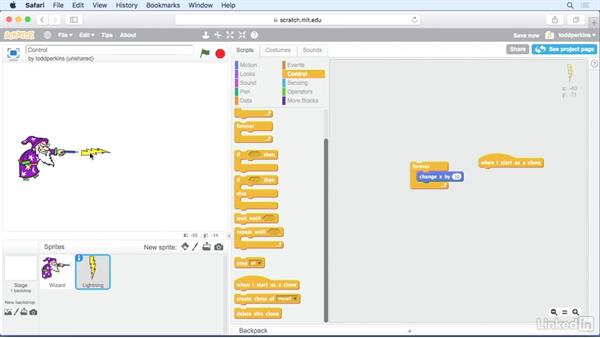 Control scripts dictate the flow control of your app. These scripts have to do with repeating tasks multiple times, checking if a certain criterion is met before proceeding, and making clones of objects in your apps. In this movie, see the basics of working with the Control scripts in Scratch, and see some examples of how Control scripts can be used in your apps.

- [Voiceover] Using the control scripts,…you can do several different types of tasks.…Control involves running commands repeatedly,…waiting for a certain amount of time,…running if then statements…that check to see if something is true,…and if it's true, then you can run a command,…and you can run a command if it's not true if you want,…and control also controls clones.…Clones are copies of a sprite,…so let's look at how some of that works.…

So this is going to run commands forever,…so unless it get's to the end,…it's going to loop back to the beginning…