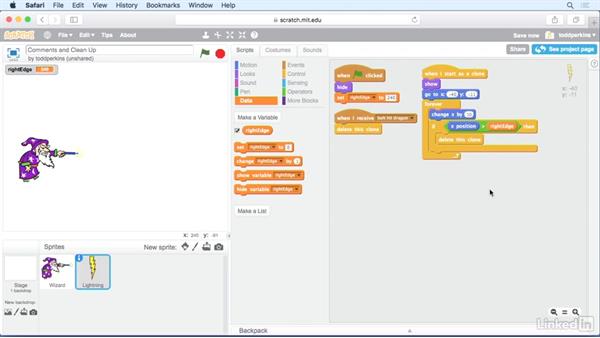 Comments allow you to make notes in your scripts. This can be a great help as you start to make larger applications, and as other Scratch users remix your applications so that you and other Scratchers can understand what a script does without having to look through each piece of it. This movie shows the basics of working with Comments and how to clean up your scripts.

- [Voiceover] As you add more and more scripts to your…Scratch projects, they're going to become more complicated…and harder to keep track of what everything does.…So to make it easier, Scratch has added the feature of…Comments and Clean Up.…Clean Up simply moves your scripts and makes them appear…more organized in your scripting pane.…So if I'm on my Wizard script right here…and I have these scripts, I can just right click…in this gray area and choose Clean Up,…and those scripts move to the top left of the screen.…

Well, what happens when we go over to Lightning…where we have multiple blocks of scripts?…I'll right click in the gray area here,…and choose Clean Up as well,…and the scripts are more organized.…Now it didn't change any of my scripts,…it just moved them so that they're not in random places,…and it also condenses that space that I have,…so I have more space to add new scripts down here.…We could also comments.…For example, if I wanted to explain rightEdge…was a variable I created representing the right edge…