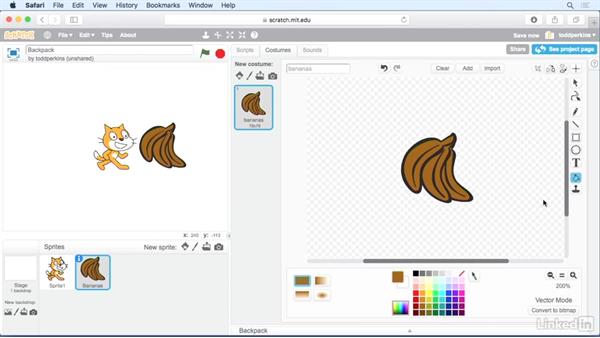 - [Voiceover] Let's say you wanted to take something…that you've made a change to for example,…and use it in another project.…Let's look at how that works right here.…So I'm going to create a new sprite from the library…and let's go to bananas,…so I'll select the bananas and then I'll click OK…and there are some bananas right there.…Now let's say I wanna make 'em a different color,…I wanna make 'em brown bananas…and then I wanna save that cause I wanna use it…in a different project and also…I wanna make 'em a little bit bigger…so I'll click the Grow button,…click on the bananas a few tmes,…then we have the large bananas right there…and then I'll go over the Costumes…and I'm now in vector mode…and so I wanna change the color of the bananas…so I'm going to click on this Color a Shape button…and then I'm gonna click on Brown…and then change the bananas to be brown.…

So now we have some brown bananas…and so I wanna recycle these…and use these in another project that I'm working on,…maybe you're making a game…and you've made the brown bananas…