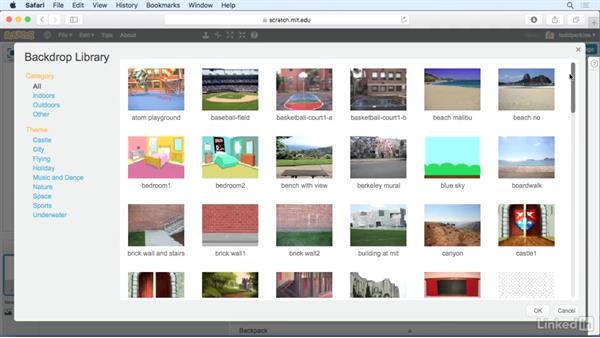 Backdrops are the backgrounds in Scratch. Backdrops can come from existing assets built into Scratch, from your computer, from your camera, or from a drawing that you make from within Scratch. In this movie, see how you can create, change, and choose backdrops for the applications you develop in Scratch.

- [Voiceover] Let's say you wanted to change…the Backdrop for your App.…Now for right now I'm working…in a project called Backdrops,…which is actually just a blank new project.…So if you want to follow along…you can create a new project,…and you can do that by going to file, new…and you can name it Backdrops, if you like.…So here I have my sprite right here,…and I wanna change the Backdrop.…Now, on the left side next to sprites,…you can see that we have one Backdrop…on our stage.…

Now if I click on that Backdrop right here…you can see that it's selected,…because it has a blue rectangle around it.…You'll notice that at the top of the screen,…that tab that normally said,…costumes now it says Backdrops.…I'll click on that tab.…And that takes us to an interesting page.…This page has our Backdrops in a list.…Now we only have one…so we only see one,…but you can actually select the Backdrop,…and you can paint on it…using these painting tools.…We'll look at the painting tools,…later on in the course…but just know that's an option here for now.…