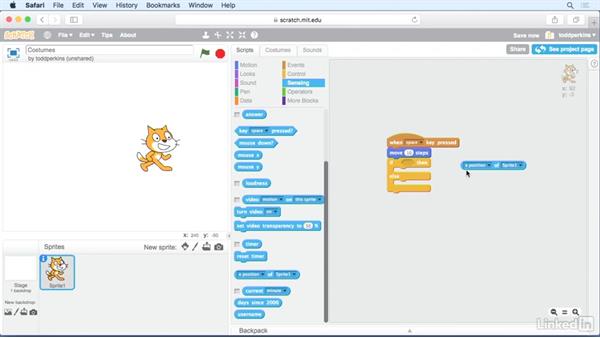 Costumes, which in other animation or development environments are referred to as frames, can be animated. Sprites can alternate between multiple costumes to change appearance. Using Scratch you can switch between costumes with scripts. Costumes can also be created from existing costumes that are modified. See the basics of costume animations in this movie.

- [Voiceover] We talked earlier about costumes.…Costumes are animation frames.…So with our Sprite 1 selected here,…I'm going to head over to the costumes tab,…and if we click on the costume 2 right here,…we can see that if we go back…between costume 1 and costume 2,…it looks like the cat is walking in place.…So let's say our goal here is to make the cat…walk from here to here, and to take a step…each time we tap the space key on the keyboard.…

So we're going to put him all the way on the left over here,…and then I'm going to go to scripts,…and I'll go to events, and we're going to start…with when space key pressed.…So I'm going to drag and drop that out…into the scripting pane.…Now what we wanna do is make him take a step forward.…So I'll go over to motion, and then…just click and drag move 10 steps out.…You can of course test that by pressing the space key,…and there he goes.…So now let's say we want him to switch costumes.…To do that we go over to looks,…and this is where the switch costume actions reside.…

So in here, I can just grab, either switch costume to,…