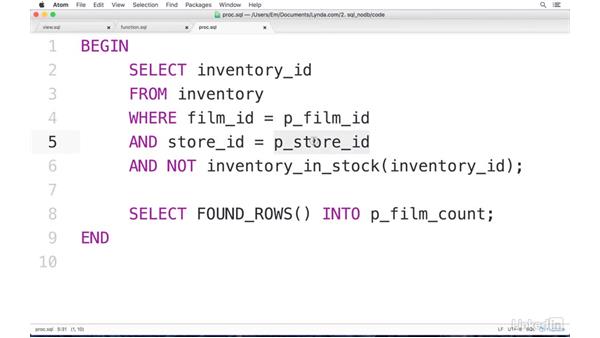 Explains stored procedures in MySQL, walking through an example and running it

- [Instructor] Now, unlike functions, stored procedures tend to do something. You'd use one if you wanted to edit or delete some data that can perform actions rather than just returning a value. We're going to look at some that do just return values, though, because I don't want to cover editing and deleting data in this course. Now let's start by looking at this query. Select everything from the inventory table for a particular film and for store number two. And when we run that we see it gives us three rows back, so there are three items of stock, all with the same film and all assigned to the same store.

Now what if we wanted to know which of these films were not currently in stock? For that we could use the film not in stock stored procedure. And if I click on it, you see the substance of the query there, which we'll look at it in a moment in Atom. But the main thing in this screen I want to show you are these parameters. So this stored procedure has three parameters, two in parameters and then one out parameter. The in parameters are film ID and store ID, and the out parameter is film count.

Call film not in stock, and then we say, parameter one is two, next one is also two and then for the final output parameter we give a variable name. And that's so, if we wanted, we could then write another query down here and we could make use of that at count like so. We're not going to do that, but that's why a variable name is specified there, to hold the value in case you need it.

And when we hit go, we return just the number nine, which tells us that although there are three copies of this film in store number two, only one of them is currently not in stock. And there's another way of checking that because we've got a stored procedure called film in stock. And so if we were to run that, we would see that the films that are in stock, for film number two and store number two, are 10 and 11.