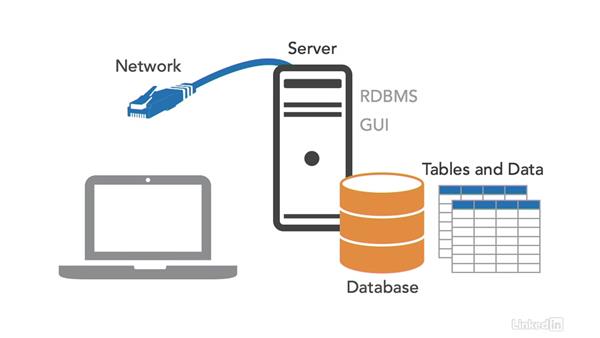 Illustrates the "client-server" setup, and explains why the student needs both database software and a database interface

- [Narrator] Now we're going to look at what happens when you access a database. You have your computer shown as the laptop on the left. You plug your computer into the network shown as an ethernet cable. In actual fact, the network might be your corporate network, or it might just be a regular internet connection. Via the network, you log into a server which is a physical computer set up to broadcast data. Many people think a server is a special kind of computer, but it isn't. Your laptop can be a server if you like. It just means your computer has software on it that will let you share or broadcast data.

Database software is placed on a server. The exception to this is Microsoft Access which is an application that sits on your computer like Excel or Powerpoint. Microsoft Access isn't like a normal database. Access lets you store data on your computer, but most databases exist to share data as well as to store it. To share its data, a database must be on a server, so the server contains the database software, the Relational Database Management System, or RDBMS, which allows you to create your database and tables and populate them with data.

The server also contains interface software, the GUI, which allows you to view your database. People sometimes get confused why two different bits of software are needed here: the database software and the interface. It can, perhaps, be explained by analogy. For you to watch TV, a bunch of TV companies had to create content and make it available for broadcast. That's like the database software. But you can't watch the programs without a TV set.

That's the interface. So what we have here is a two-part setup. On the left, you have your computer with some software on it. On the right, you have the server with software on it which holds a database containing tables and data. The two sides are connected by the network. This two-part setup is called the client-server relationship. Your computer and the software it holds is the client, and the server and all the software it holds is the server. The client is also referred to as front-end and the server as the back-end.

It's as though the whole setup is the two parts of a pantomime donkey. The front-end is what's visible to the user, and the back-end is all the bits you can't normally see helping to make the front-end work. If you're accessing your database at work, your server might be a bit bigger and meatier but the setup is essentially the same. A network connects you to the server, and the server holds the database software, the data, and the interface.