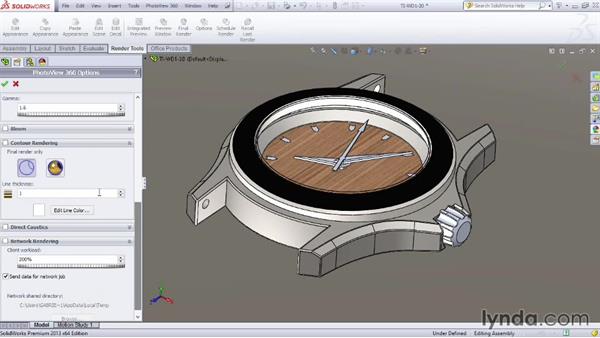 The Options panel allows us to adjust the final output of the software and control the resolution and fine detail that will be produced. To get started let's click on the options at the top of the screen under the Render Tools tab. Under there we can adjust the size of the image. We've got a bunch of presets under this first button here. I can go down to like 640 by 480, 1024 by 720. Your choice. Or you can come down and do a custom option. Right now I've got it set up at 1200 by 1200, and if I turn this option on here, as far as a fixed aspect ratio, anything I type into one of the boxes should automatically show up in the other box.

So, I'm locking that aspect ratio of one to one. Or, if I go back to 1200, same thing it's going to automatically update I can turn that off if I want to make my own custom resolution but generally recommend making it either a standard size or something like a square just to add some consistency when you're designing and outputting images. The next thing is the image format. I've got a lot of options of how I can output this image, and my favourite one is generally a PNG, or a TIF format. However I can also export many different types of JPEGs, Bitmap images and a whole bunch of other ones.

Generally I want to choose either a. PNG or a TIF file, because they can include an alpha channel which allows me to remove the background of the image after I'm done processing it. Using a software like Photoshop or some other image editing software. For this case here, let's go ahead and choose PNG, and choose the output folder. I'm just going to put it on the desktop, under my account, under pictures. But you can save it anywhere you like. And come down here to render quality. Now render quality's by default is set at just good, but we can go to better, best, and maximum. Be very careful with this because changing from good to better generally can increase this by about six times the time it takes to actually render the image out So when they're good, it may take about 30 seconds under, better, it might take two, three minutes to render the same image and best and maximum are really going to escalate that even further.

So really be careful. My recommendation is to start off with a good render. Once everything looks good, you might want to pump it up and maybe run it overnight or run it while you're having lunch, something like that. You can also adjust this to, to Custom render settings if you'd like and adjust how many reflections are happening and refractions and everything else. The only time you might really want to do the custom render setting is if you're doing a lot of glass and you want to have multiple bounces of their reflections to give a more realistic look. Bloom allows it to, when you have something that's going to be bright, how much it expands or highlights around the bloom, so you can turn that on if you'd like and here is the settings, I generally don't use that but it's available.

Counter rendering allows us to actually render out only the contours of the edges. You'll see, on the pallet like these edges here. They'll render out all those. Or you can render it with the edges included on top of the entire rendered image of the solid model. So you're choice in either one of those if you want to turn it on. And I'll show you a couple examples of that in a second. Caustics is when light comes together and it creates hot spots, so we can turn that on if we want the software to calculate where they might show up, but I generally leave those off as well. And then finally is network rendering. If you have a couple extra computers that we could use as a network rendering farm We can turn this on.

Establish a shared network directory. And several of the computers can grab those buckets of data and render out the image and that really improves the time, especially when you're doing large renderings or animations. When your happy with everything, go ahead and click on OK. And, let's go ahead and do a final render here, so click on the button for final render. And away we go. Over here on the right you can see some of the details' going to be going on here. We're looking at estimation of how long it took to process (SOUND) the image and it gives us a exact time to run it.

It only took us 24 seconds. For that one, for the frame settings it took 1,200 by 1,200. Some other data that is going to be available if you need to use it in the future. Take special account into this rendering time. Total lap time 24 seconds. If I do the exact same image which I've done in past here, it took us three minutes and 40 seconds to render the exact same image. This one is just better, not best or even maximum. That's just one step up took 340 versus in this one, only 24 seconds.

I also want to point out a couple of other ones here, this one here is showing those lines, in this (INAUDIBLE) view. So if I jump back over to the software, in the background here, under Options. You can see we're talking about contour rendering, so that's rendered with the image behind it or rendered only with just those contours. And I can adjust the line thickness and color if I want to as well. But jumping back to the final render window here, you can see this is with the contour and the solid model. And this image here, let me make it bigger is only the contour so it's a nice way to kind of just get an outline of an image if you're working with something, it has some uses and it looks pretty cool for some different feels and look for different things you might be working with.

(UNKNOWN) rendering provides many options to customize the output of images, you might be tempted to max out all the options and get the best image. However, some renderings can take hours. So my suggestion is to start with a lower setting and test out some sample images. A good use of time would be to schedule renderings overnight or to setup a network rendering configuration.

10/29/2013
How do you present a technical design in a way that everyone can understand? Try PhotoView 360, which makes it possible to create photorealistic renderings and animations with SOLIDWORKS Professional and Premium editions. In this course, Gabriel Corbett shows you how to transform a SOLIDWORKS model into a fully rendered animation. Learn how to apply materials and textures (including transparency and reflectivity) to parts and assemblies, set up the environment with cameras and lights, and render a final realistic image. The last chapter shows how to animate your scene and output the final video to share with your coworkers or clients.
Topics include: