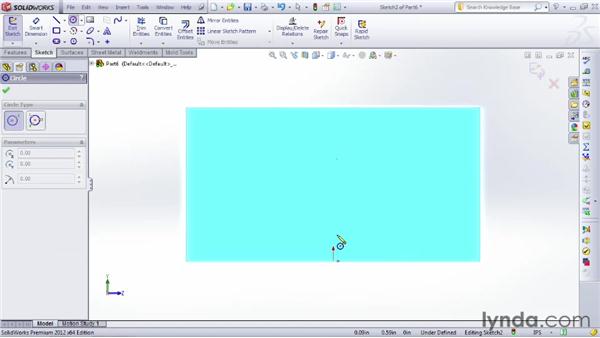 Almost all features in SolidWorks start with a sketch. Sketching correctly and effectively is the key to be a proficient designer. In the six steps of solid modeling we covered the basics. However, let's get in a little more depth here. Let's pick either the Front, Top or Right Plane. I'm going to choose the Top Plane. Select that Plane, make sure you're in the correct sketch tab and then click the very first icon there under Sketch. As soon as I do that, I'm looking at that plane, head-on, and I'm in the Sketch environment. I'm just going to throw a little sketch up on the screen here. I'm just going to use the Rectangle Command, I'm just going to draw it out here.

I'm going to use that Centerline we covered earlier, and then I'm going to click on that origin, hold down the Ctrl key and grab that line. Once I select those two, it gives me the ability to add a Midpoint relationship. So I have that first design here, I can still move it around a little bit if I need to. Once I have my first sketch, I have a couple of options. If I want to get out of that sketch and go to something else, or delete that sketch, I have these two icons on the upper right-hand corner. The first one is called Exit Sketch. What that's going to do is just going to draw me out of that sketch, and it's going to drop it over here on the left-hand side of the screen.

The sketch is still there, but now it's grayed out. So I don't have the ability to edit the sketch at all. I just have it listed here as Sketch1. If I want to get back into that sketch, I can just click on it and you'll notice I get this little in-context menu box that pops up, and the very first thing is Edit Sketch. Next one is Sketch Plane. I can suppress the feature. There's a bunch of things I can do here: Show Edit, Normal To, but the first one I'm looking for is called Edit Sketch. Click on that, now I'm back in the environment that I can modify this sketch around. The second one here is Cancel, and it's just going to delete you out of that, so most time you want to use the red X because that's going to not save any of your work.

Once you have what you like, what I'm going to do now is, I'm actually going to turn this into an Extruded Feature. Now we're going to cover Extruded Features in future chapters. So I'm just going into the very basic command of extruding a feature, just to give us the ability to draw on a few more faces. So I'm just going to drop that Extrude Feature there. So now we have a block we can start continuing our model on. I'm going to say Sketch, and this time instead of choosing one of these three planes here, I'm going to choose the Face. This time I'm going to choose this face here and I'm going to start a sketch on it. If I click on the Spacebar, I get the option of Normal To.

That way I can spin it around and look directly on it. So I'm going to use the Circle Command, and I'm just going to put a circle right there in the center, and because I want to be Origin- centric, I'm going to use the Centerline. I'm going to tie-in from the origin to the centerpoint of that circle. Once I have that, I have the ability to go ahead and extrude it out again if I wanted to and create a feature. The Feature Manager is the main interface for controlling your model. All features and their sketches are listed in order of creation. By selecting a feature we're able to access the sketch and their properties associated with it.

Each feature is independent of the others, however many features are built upon and related to the previous features. Notice the two features here; we have feature 1, our Boss-Extrude1 and Boss-Extrude2. Under each one of those features is the sketch that created it. If I want to modify it or change any of these features, I can either change the sketch that makes it or the feature that drives it. The sketch itself changes the size or the shape of it. The feature itself is really the length of the Extrude or the Cut.

There are a few other options that we can put in here and we'll cover those later. But you think about it as related but independent. The sketch can be anything you want. So if I go back and I change that sketch and I make it smaller, the feature doesn't care it's smaller. Now the feature extrudes the exact same length but the sketch changed. Same thing if I go back to that same sketch, click on Normal To it, and I add a little bit to it, put one more circle out here. Get out of that and then guess what happened? It just added one more circle to that Extrude feature.

The Feature Manager over here looks exactly the same. The only thing that changed was that underlying sketch, and we just added one thing to it. So we can always go back and change or modify each one of those. To get into that mode, we click on the sketch we want to change, click on Edit Sketch or click on the Feature itself and change that entire Feature. The Feature Manager is user's main interface for working with a model. Understanding the key aspects of the interface is an essential skill to being proficient in SolidWorks. However, sketching is the most important aspect of design and the key to a good SolidWorks feature.

Take the time to think through your sketches and develop simple and effective layouts. Look for symmetry, use construction geometry, and add relations.

3/7/2012
In this course, author Gabriel Corbett shows how to create manufacturing-ready parts and assemblies in SOLIDWORKS 2012. Beginning with simple 2D sketching and the software's sketch-editing tools, the course provides step-by-step instruction on building 3D geometry from 2D sketches. The course covers creating complex 3D objects with the Extrude, Revolve, Sweep, and Loft tools and shows building complex assemblies by mating individual parts together into robust assemblies and structures.

The course shows how to cut and revolve holes into parts and use the Hole Wizard tool to generate industry standard holes like counter bores, counter sinks, and taps. Best practice for designing parts is emphasized throughout the course as well as methods for creating parts faster and easier using equations, mirroring, and patterning tools. The course wraps up with generating manufacturing-ready drawings complete with an itemized Bill of Materials. As a bonus feature, Gabriel shows how to photo render a final design. Exercise files are included with the course.
Topics include: