Starting to build the connecting rod 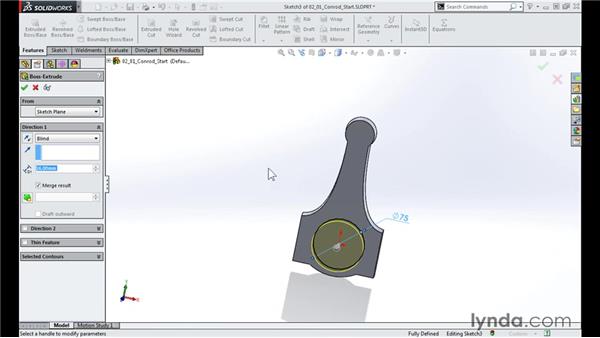 Join Leon van den Heever for an in-depth discussion in this video Starting to build the connecting rod, part of Modeling a Motorcycle Engine with SOLIDWORKS.

- To start on the connecting rod open from the chapter two folder the 02_01 Conerod Start part file. On the front plane we have an existing sketch constructed with a (mumbles) angle, a start spline, and three point arc command, which we have already used in chapter one. Note that we have sketch one as the main profile and it is on the front plane. This is so that this orientation would be the front view on a detailed drawing if needed.

Now let's select sketch one and do an extruded bus. Since we will mirror the extrusion we will do a blind extrusion in one direction only. So set the depths to 16 millimeters and note that in the properties we do have an option to add draft to our extrude if we wanted. Now this is useful if we want to add draft to all the sides of the profile, which we don't want to do at this stage. Let's complete the command and look at the next tool that we'll be using.

Next I want to add draft, but only to select faces. Now for this we have on the features command bar a draft command. Now click on the draft command in the property manager. For the type of draft use a neutral plane. With a neutral plane box selected select the back face of the model. If needed, reverse the direction so the arrow in the graphics view points to the front. Set the draft angle to five degrees.

With the faces to draft selection box selected select only the three top side faces so that the draft will not be added to the two vertical and bottom side faces. Now complete the command and you can see that we have only applied draft to the three selected faces. On the front plane let's sketch a circle on the origin and let's dimension this to 75 millimeters. Now from this do a blind extrude and we will set this to 21 millimeters and in one direction only.

We'll use a blind in condition at a depth of 5 millimeters. Under selected contours delete the sketch two entry that's already there, and then from the graphics area let's select the three outer edges of the slot sketch entities. Let's complete the command. Now on the front plane let's start a new sketch for the profiles of the bearing and shaft holes of the cone rod.

Select the bottom circular edge and do an offset entities command at five millimeters and to the inside of the selected edge. Sketch a concentric circle to the larger top arc. Note that the top arc has been sketched on the front plane. Now remember you can wake up the center point of the underlying arc by hovering over the arc edge with the circle command selected. Using shift dimension we will dimension the underlying arc to the new circle at eight millimeters.

Do an extruded cut with a through all in condition. Reverse the direction if needed. With that done let's select the mirror command. Select the back face of the model as the mirror face. Then activate the bodies to mirror selection box and then from the graphics view simply select the model and we can go ahead and complete the command. Let's leave it at that. Save your work and I'll see you in the next video. 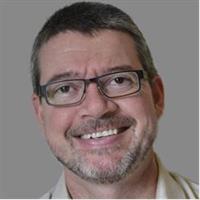 9/26/2014
Join Leon van den Heever as he models some of the major internal components of a motorcycle engine—a teaching example that will help you master the tools and techniques employed in a typical SOLIDWORKS automotive design project. Here you'll be exposed to many of SOLIDWORKS' tools, including equations and configurations, and learn how some of the available tool attributes can enhance their power. Follow along as Leon sketches and builds the flywheel; connects the connecting rods, valve, pistons, and sprockets; and pulls the components together in a bottom-up assembly.

Need a better background in SOLIDWORKS before you can continue? Check out SOLIDWORKS 2014 Essential Training.
Topics include: