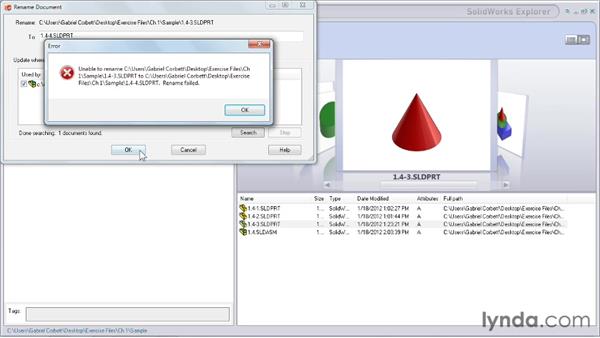 Saving your work is essential in all software. However in SolidWorks it's very important to understand how files interconnect. Let's take a look at this example. This is Assembly 1.4 and that's made up of 1.4-1, -2 and -3. These three files are separate files in the file system, which are linked together in this top-level Assembly. Let's take a look at the File Structure. In the top level here we have a widget. This is a top-level Assembly in that is made up of two parts, and then another subassembly and a drawing of that top-level assembly.

This subassembly here is made up of two more parts, another subassembly and a drawing, and then these two drawings down here represent the drawings for Part3 and for Part4, and we have further structure that goes down here, and this can be as many files as it takes to make your Assembly. Now look at Part4. If we were to take that part and change the name without alerting the other members of the file structure that the part changed, Assembly2 might be looking for Part4. It wouldn't be able to find it. It can cause a problem. Same thing with Drawing7. Drawing7 is linking up to that part and looking for that part name or number.

So changing that without alerting everybody else is going to cause a problem for the file structure. The way it works is this. Files are linked by name. So if you call a part, Part4, it's always going to be looking for Part4 in the associated path or directory. So make sure the path is correct and the directory you're saving it in is complete. If you, for instance though take a copy of the entire directory structure in a folder and move it to another machine or another folder, it won't look further than that. It's going to find the folders that are closest to it. We have an assembly which then links to a part, which then links to a drawing.

If I were to do Save As in the file structure, it's going to change that directory linking from assembly to the new part name back to the drawing. Now the problem is, we have a part that's just sitting on the file structure not doing anything. It's not linked to anything; it's the same part as this one here, it's just no longer linked. So that's not really the ideal way to change names of files. A better way is actually to use SolidWorks Explorer. So let's jump in there. This is the SolidWorks Explorer and we have that same Assembly opened up here under just Desktop > Exercise Files > Ch 1 and we are under the Sample folder.

We've got the three files that make up that Assembly. If I click on each one I can see it, and here is my top-level Assembly. Now if I wanted to change any one of these names, I can right-click on it and click on the Rename button. Notice this file is the 1.4-3 and it goes out and searches the file structure for that Assembly, or any linked files actually, and the only one it's finding is that Assembly which is the 1.4, and make sure we have a Checkmark here where it says Update where used. Now if I click here and I change it to 1.4-4 for instance, click OK.

It's going to give me a little error. It's going to say, hey, there's a problem saving this, and the reason it is, is because we actually have that part open in the background. So let's go back to SolidWorks and let's just save these, close them, jump back over here, click OK. Now let's try it one more time. This time, no problem. They changed from - 3 to -4 and everything up based just fine. Now the other way and people will get themselves into trouble is going just to a regular Windows Explorer. Now under Windows Explorer, I am in the same folder, I jump in that same file here and I can see those file names.

Now I were to say, click on that and hey, let's just rename it, right? So if I go and change this one to -5 for instance, and I save that. It'll allow me to do that, no problem. The only problem is, is when I go back into SolidWorks, it's not going to know which file is what. Now SolidWorks does help out a bit and they'll say, hey, I can't find this file, can you locate it for me? But that's probably not the best method for going about that. Okay, let's jump back into SolidWorks and open that file. So if I click on R on the keyboard, it brings up my Recent Documents. Here is 1.4. Let's open it up, and notice the files have now updated to 1.4 and -2 and -4.

So there is no longer a -3. It's been replaced by -4 and we don't have any extra files just floating around in our file system. So that is a nice little update on that, and it's the best way to change files. We can also do some saving and backing up in SolidWorks. If I click on the Options tab on the top of the screen, under the System Options, about three-quarters of the way down, there is a tab called Backup/Recover. Now I can automatically recover data for each one of my files if the SolidWorks were to crash for instance and I can do it in a certain interval. So 10 minutes seems like a long time, so I'm going to change it to 5 and then wherever I'm saving this at, this is kind of the default and that's fine.

If I go down here to Backup, I can save backup copies of my document. By default 1, I can change this to 3 for instance, and that's going to save, the last three times I save that document, it's going to put that in a folder. I've got a folder called C:\Backup here. Using that folder, you can change it to anything you'd like. I'd actually recommend not saving it on your C drive and saving it to a server or an external backup drive, something along that lines that can make sure that if this computer were to crash that you'd still have those files. Just a little housekeeping here is, if you're saving multiple copies of each file, you can get a lot of files in this one folder.

So automatically every 7 days here this would remove the older backups and make sure you're not adding too many files to that directory. And the last thing here is just if you work on a document, you want to have a reminder telling you every certain amount of minutes to save your work. It's definitely advisable. SolidWorks in general is a very amazing software and you can do amazing things with it. But along the way, just make sure you're saving your work. Naming files correctly the first time is really the best way to make sure that you don't get into trouble with losing files and having issues like that, and it's going to be a lot less clutter and a lot better designs.

3/7/2012
In this course, author Gabriel Corbett shows how to create manufacturing-ready parts and assemblies in SOLIDWORKS 2012. Beginning with simple 2D sketching and the software's sketch-editing tools, the course provides step-by-step instruction on building 3D geometry from 2D sketches. The course covers creating complex 3D objects with the Extrude, Revolve, Sweep, and Loft tools and shows building complex assemblies by mating individual parts together into robust assemblies and structures.

The course shows how to cut and revolve holes into parts and use the Hole Wizard tool to generate industry standard holes like counter bores, counter sinks, and taps. Best practice for designing parts is emphasized throughout the course as well as methods for creating parts faster and easier using equations, mirroring, and patterning tools. The course wraps up with generating manufacturing-ready drawings complete with an itemized Bill of Materials. As a bonus feature, Gabriel shows how to photo render a final design. Exercise files are included with the course.
Topics include: