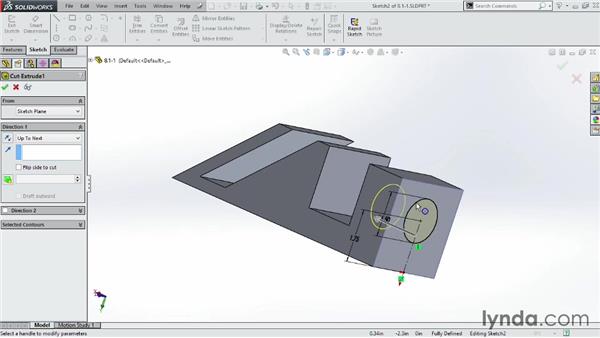 Extruded cutting is one of the helpful features of SOLIDWORKS. This tool allows you to cut out portions of a three-dimensional sketch quickly and easily. There are several features of this tool that allow you to either cut through small sections of an object or through its entirety. Watch this online tutorial video to gain a better understanding of modifying parts using the Extruded Cut tool.

The Extrude Cut command is basically the same as the Extrude command, except that now we're cutting with this feature. The requirements are a closed-sketch region on a face or plane, and something to cut through. Let's start by selecting a face and drawing a simple sketch. I've actually already done this by choosing this face here, and I've got Sketch 2 placed on that face. Go ahead and edit that sketch. You can take a look at what we have. You can see I've got a inch and a half circle, 1.75 from the origin on center. Go ahead and exit out of that.

And now what you can see is we're going to be cutting through this part here in multiple different ways. So let's go up here to under Features, go to Extruded Cut, and go ahead and if you don't already have a face selected, we can go ahead and choose that sketch right there first. And automatically as soon as I choose that it automatically highlights here. The other option here is if you already have that sketch, or you're already in that sketch, you can jump right in to that feature and it automatically turns it on. Next, take a look at some of the options. One is, up here at the very top, we're starting from the Sketch Plane.

We also have the option to choose a Surface or a Face or Plane, a Vertex, or an Offset. In this case here, if I was to choose an Offset, I could then type in the value, and change the direction, I can actually start inside of that face, if I wanted to, to give you an example. Take a look at the Blind, and I'm going to go ahead and make that a little deeper, so you can see it actually pops through, at least on the other side here. So a fixed value of one and a half, and we're Offset by 0.4. Let's try it out. Click OK, you can see there's actually nothing cut here, because we Offset from that surface, but if you spin it around you can see that we actually have this circle or cylinder cut on the inside of that face and it's 0.4 from that original starting face.

So, that's an example of Offset. Let's go back to that feature now. Let's go ahead turn that off so we're staring right at the sketch face and take a look at it again. This time we're starting here, so it goes all the way through. This is an example of a Blind Cut. You type in the value of exactly one and a half and it cuts exactly that far. You can extend that even further if you'd like. In fact, you can even extend it up into that next piece. If you click OK, you can see it cut all the way through the first piece, and all the way up in the next one by whatever value you happened to type in for that Blind Cut.

Next, let's go back again to the Feature, and take a look at some of the other options. So instead of Blind, let's click on, maybe Through All. Through All will automatically make this go the full extent of the part. Notice it goes all the way down here to the very tip of the part. Click OK, and it will automatically go, always, through the entire part, no matter how long it is. If you adjust the part later to be longer, it will still continuously always go through the entire part. Go back again, take a look at some of the other options. Instead of Through All, let's go Up to Next. Up to Next will find the next face that it can find, it will fully close off that shape.

So this case here, it's a one and a half diameter circle. We gotta make sure that this face would completely close it off, which it does, and it stops right there. If we were later to modify this part right here, and make this face a little further away, it would still always go up to that next face. Again go back to the Cut, Cut Feature, go to Edit Feature, and take a look at some of these other ones. Up to Vertex is up to a point. Maybe I can choose this point here Right there and you can see it cuts all the way up to that point. That'll gave us a little bit of a funny shape up here, but we'll try it anyways. So you can see I'm actually only cutting up to that point, so I'm only getting half the cut through on that one face, but in some cases you might want to be using that in your design.

Instead of Up to Vertex, how about Up to Surface? In this case here I could choose, well maybe I want to be right up to that surface there. In that case it would cut and go all the way through. That looks good. Or, what I could do is Offset from Surface, which is the next one, and I can Offset it a certain amount. Maybe I'll Offset 0.25. Click there. Make sure I'm saying Offset from Surface, choose the surface. You can see that actually, it's going to cut on the side of that, click OK. It's a little bit hard to see, so let's go ahead and use the Section Tool. We'll cut that thing right in half, and take a look.

So you can see it's using this surface as the driver, and it's offsetting by a quarter inch to finish that Cut feature. Go ahead and turn off Section View. Come back and let's just look at a couple other ones. Up to Body really doesn't work in this case here because we y only have one body. But if there's a secondary body in your design, you could cut up to that one. And then the final one here is Mid Plane, which will allow you to cut both directions. In this case here, that wouldn't really do much because we only have material in one of these directions. But if you did have some extra material over here, you'd be cutting into that as well.

However, if you were drawing maybe on this face, or this face, and that would make sense because you could cut in this direction, or that direction, using the Mid Plane Cut. Besides our basic cuts, if I go back to the Blind Feature, obviously I can type in a value. I also have the Flip Side to Cut, so I can put it on the other side. So in this case here, anything that's not in that feature would be cut away, so click OK, and it's just going to give you this cylinder. Click OK, and it's going to remove all that extra material. Go back, same thing as when you do the Flip Side to Cut. Again, if it asks you which values you want, and you can select the Bodies.

Say what, I just want this, this Body here or maybe that Body there. Just by choosing the bodies you want to keep, and if you don't want to keep one of them, you can turn it off, and it just leaves the remaining body. So pretty handy. Go back again to the Feature. This case here, I'm going to turn that off. And you can also add Draft. So if you're using Molding Tools or something like that, you Mold this part later, you might want to add a few degrees of Draft to make your part moldable. Click OK, and now you can see that's a tapered hole, or tapered cylinder. Much like the Extrude command, Extrude Cut is straightforward and easy to use.

It's one of the most used commands, and there's a variety pack of options that make this feature extremely powerful.

12/9/2013
SOLIDWORKS is the world leader in 3D software for product development and design. Start creating manufacturing-ready parts and assemblies, as well as detailed drawings and bills of materials. In this course, author Gabriel Corbett shows how to create 2D sketches that will become the basis for your 3D models. You'll use the Extrude and Revolve tools to turn 2D sketches into 3D parts, then create more complex geometry with sweep and lofts. Then learn how to use the cut features to remove material and shape parts, and use mirroring, patterning, and scaling to modify parts. Next, you'll combine parts into movable assemblies and subassemblies. Finally, you'll create accurately annotated drawings, complete with itemized bills of materials that relate the final parts and assemblies to a manufacturer.
Topics include: