Extruding a sketch into a 3D object 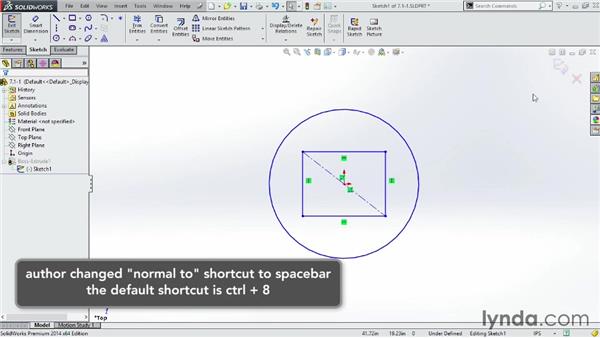 Extruding a sketch into a 3-D object is one of the most frequently used ways of creating solid 3-D geometry from basic sketches. In this video, you will learn how to use a combination of basic sketches to create a basic extrusion as well as advanced features such as offsetting the extrusion. You will also learn that sketches and extrusions are treated separately in SOLIDWORKS, which means you can modify a sketch after having used it for an extrusion and see the extrusion update.

Let's get into the solid aspect of SolidWorks. Until now, we've learned how to create sketches and work with sketch geometry. Now it's time to take those sketches and turn them into 3D solids. The first of these commands is the extrude command. The requirements are a closed sketch region or multiple closed sketch regions, and then just choosing the extrude feature. In this case here, I've got a circle, and I've got a rectangle, inside of each other. What I'm going to do now is, I'm going to come up to Features, click on Extrude Boss/Base, and click OK. And what that does is, it fills in the space between the circle and the rectangle with a solid feature.

Go ahead and grab the arrow, pull it up, and I could also come over here on the left and actually type in a number. So I'm going to type in 6, click OK and accept it with the green check mark. And there it is, a very simple Boss Extrude feature from a simple sketch. Now I can go back and modify this as well by choosing either the featured itself or expanding that out and choosing the sketch directly below it. So in this case here, I might choose the feature itself, click on Edit Feature Now I can also, instead of just a blind feature, I can also choose this drop-down here. I can choose up to vertex, up to surface, offset from surface up to body.

But a lot of these things, we don't have other bodies in our model, or other surfaces, so we can't use them quite yet. But we'll be using those more in depth, in later chapters. But we can use Mid-plane. Take a look at Mid-plane. That just does it both directions, the same amount. And I can say maybe 10. You can see it goes both directions from the sketch body that we've originally created. We also have the ability to add draft if we wanted to, and we can adjust how much draft that is. And we can draft the other way as well if we need to. So a lot of really cool, powerful tools that are involved in the Boss-Extrude feature. Also keep in mind we have the ability to change where we're extruding from.

By default, we're extruding from the sketch plane. However, I can change it from a face, a plane, or even an offset. If you choose offset and change this back to blind, I can then offset it from where I drew the sketch at. So now I can see I'm moving the entire block up above the sketch plane it was actually drawn on. So definitely take a look at some of those different options. There's some real powerful changes to the model. For right now I'm going to go ahead and turn that off and click OK. Now I want to see what happens if I go back and take a look at the sketch itself. Click on the sketch, edit the sketch.

In this case here, I'm going to take this circle inside here and I'm going to drag it outside of the rectangle. Now I'm going to click on exit sketch and see what happens. Wow, take a look at that. Now what happened was the circle that was inside is now outside but still SolidWorks fills in the space between the outside boundary and the inside boundary just the same. You have to think about features and SolidWorks like 2 independent items. The sketch itself defines the shape, and the Boss Extrude just defines how much it's being extruded or pulled into free space. So really, the Boss Extrude does not really care what's in sketch 1, as long as it can figure out what to do, it's going to take that sketch entity, drag it up and pull it into 3D.

So really, they're independent of each other. In fact, I can go back to the sketch here and I can improve it, maybe I'll add a few more circles. How about one up here? One down here, one over here, and one over here. How about a flat section? Maybe I'll take a line and I'll cut a line from here, all the way across over to here. And adjust it a little bit and maybe I'll practice using some of my trim tools. Here's the power trim, I'll trim this away, trim that away, and trim that away. Now exit out of the sketch and that automatically all gets put into my new Extrude feature.

Now if I want to continue on, I can choose either a face or a plane to start another Extrude feature and start building things on top of each other. So in this case here, I'm going to choose this face here. Come up to sketch. Choose a sketch, and I'll choose a circle, and I'll just drag that out. Features, Extrude, and I'll drag this out a little bit. Type in the number, we'll say 15. Looks good. Click OK. Again, it's like Legos, we're just stacking them one on top of each other to build a more complex shape. Now I have the option, I can choose maybe a face like this.

Again choose a sketch, start a face, draw a rectangle, or whatever you want, click on Features, click on Boss Extrude. In this case here, I could say well, I'd like to actually extrude up to this face here, wherever it happens to be. So in that case here, I can choose, Up To Next. I also have a lot of other options here as far as Blind, Through All, Up To Next, Up To Vertex, Surfaces, Mid Body, so take a look at some of those. As you get into more complicated shapes, You can start utilizing some of these to really help out. Click OK. There we go. Of the 4 main, solid features, Extrude is the most common and easiest to use.

The feature itself is very simple. However, it builds on the complexity of the underlying sketch. There are also a variety of in-constraints that you can assign to this feature to affect how it builds the shape. The Extrude command is the building block that is used most in model creation.

12/9/2013
SOLIDWORKS is the world leader in 3D software for product development and design. Start creating manufacturing-ready parts and assemblies, as well as detailed drawings and bills of materials. In this course, author Gabriel Corbett shows how to create 2D sketches that will become the basis for your 3D models. You'll use the Extrude and Revolve tools to turn 2D sketches into 3D parts, then create more complex geometry with sweep and lofts. Then learn how to use the cut features to remove material and shape parts, and use mirroring, patterning, and scaling to modify parts. Next, you'll combine parts into movable assemblies and subassemblies. Finally, you'll create accurately annotated drawings, complete with itemized bills of materials that relate the final parts and assemblies to a manufacturer.
Topics include:

Video: Extruding a sketch into a 3D object