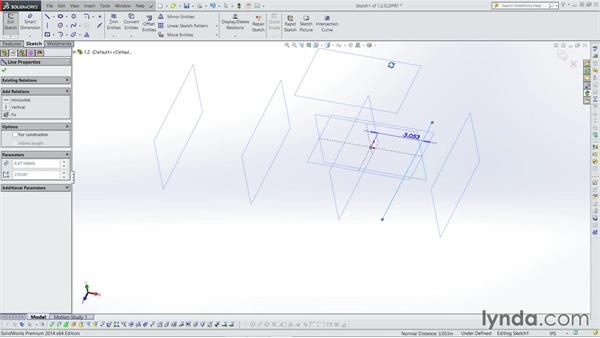 - The first step in creating almost all features when in SolidWorks is to start a sketch on a plane. When we open a brand-new part document within SolidWorks, we have the option of the front plane, the top plane, or the right plane. However, if you're working with the Weldments package, more than likely, you're going to be creating a lot of different planes to define the lines which will then become the structural members. What I want to do is teach you a couple techniques so you can create more planes to make laying your design out a little bit easier. Okay, first things first.

Let's jump over here and show the planes, so our front plane, top plane, and right plane, make sure all three of those are shown just so we can see what's going on here, while we're creating other planes. Now, under the Weldments tab here, you can see there's an icon for Reference Geometry here. It also should be under the Features tab under Reference Geometry, and if it's not there, you can always customize your own tool bar, as you can see. I might have a few extra things up here in my tool bar that you might not have. No problem, right-click on any one of these tabs here and say Customize Command Manager.

You can go to Commands and choose, for instance, come down to Features. You can drag and drop any of these up into that tool bar, or you can drag any features from any other tool bars to whic ever tool bar you want. So, fully customizable. What I do want to grab, though, is the Reference Geometry. Come down to Plane. Now, when you're creating a plane, we've got a bunch of different options. In fact, we have three very important things here. The first one is a reference, the First Reference, Second Reference, and Third Reference. Depending how powerful the reference is that you choose, you might only have to choose one, or two or three.

The most powerful is going to be another plane. In this case here, you can see the right plane has already been selected, and I'm just giving it an offset. I can drag this over here, I can say, "Hey, I want to rotate it around it," I can click on some different items here. If I automatically chose another plane, just delete that out of there. Or I can just type or just use the arrows up or down to just offset a plane a certain distance. In this case here, maybe I want it to be six inches away, or 60 inches, it doesn't really matter, as far as you want.

I can create multiple planes here. I can flip it over to your side. Again, if I zoom out, I can say, "I want to create "a bunch of planes all in a row here," so you're doing a layout like a boat or something like that, or maybe a sandrail type of car that has bunch of different individual members that are going to be supports and intermediates, great way to lay these kind of things out. So, great way to do that. If you don't want all those, just go ahead and turn those off. I'm going to go ahead and leave two of those on there. They also have the option of mid-plane. I can put things on either side of the plane, as well.

So, great, lots of options. I can, again, put that back to the distance away, click Okay, and I've created two more planes. Now, if you want to create planes in other directions, same thing: Reference Geometry, choose a Plane, and then just choose one of the existing planes, and, again, click Okay and there's my new plane. Using the fundamental planes and just offsetting, very, very simple. In fact, if you hold down control, you can drag and copy out a plane as a quick shortcut.

Now to get a little more complicated. If we want to turn a plane on an angle, that's where things get a little more complicated, and that's where I need, generally you'll need a little bit of sketch geometry to help me out. In this case, what I want to choose is this top plane. Notice I've got a lot of planes going on in there, so choose a top plane. And let's just start a sketch. So start a sketch on there. I'm just going to make a line right here. Doesn't really matter how long the line is. But we do care is, from the origin, how far to that line are we going to go? I'm just going to spin that around so you can see it a little better, and type in three inches, okay? Now I've got a line, and I'm going to exit out of that sketch.

I'm going to go ahead and just turn off some of these other planes, so we can kind of see what we're doing here just a little bit easier. So there's the planes we have. And notice they're a little bit kind of skewed at this point in time? That's because planes have the ability to resize themselves. I can grab these little corners and drag them around. I can grab the corners of this plane here, move them around as well. Same with the front plane. Sometimes, they'll just kind of automatically get set up in a different way that doesn't look right.

So you can grab them and adjust them as needed. Now we got these planes, so let's go over to the Features tab, grab the Reference Geometry, choose Plane, and instead of the top plane, I'm going to cancel out of that, hit Delete. I'm going to choose that line right there, okay? Then, now, basically, I'm hinging this new plane around that line. It's going to ask me, well, what angle do I want to hinge it at, or what other plane do I want to make as another reference? That's where that second reference comes into play here.

If I choose, for instance, the right plane, you can say I'm perpendicular to the right plane on that line, or I'm parallel to the right plane on that line, or I can set an angle. As I rotate, you can see I'm hinging around that one little line, and I can set it up at any angle I want to that. Now, because I've got enough information here, I don't need a third reference. I only need a plane and a line. Now, if I'm using only points, I will need all of three, because points don't ...

they're probably the least powerful of all the features inside of SolidWorks. So I would need three individual points to lay out a plane. In this case here, that's all I need. Click Okay, and there's my plane. Now, I'm going to start a new sketch on that new plane. So, start a sketch, here it is. This time, I'm just going to choose Point. I'm just going to put a point randomly out here in space, and there he his. Exit out of that sketch. Now, I'm going to go over here to this other plane, the right plane here.

Again, I'm going to start a sketch. I'm just going to put two random points. Now I'm going to exit out of this sketch. Now, you can kind of see what's going on here. You got two points here, and you got a point over here on this plane. When you're delaying something out, you'd probably define where they are or how tall they were, but if you want to put a plane at some strange angle, this might be the ends of your pieces of tubing or something like that you might be using, for doing a weldment or all kinds of different things. But I'm just pointing out that there's three points on my screen, and that's what I'm going to use to define a plane.

Go up to Features, come over to Reference Geometry, choose Plane. First Reference, let's go ahead and choose that point. Next reference is this one. As soon as I choose that next reference, notice what happens. It starts laying out a plane between these points. As soon as I choose that third point, you can see what happens there. It's creating a plane through those three points that I chose. Now, those points can be on any one of the sketches we predefined, or the fundamental planes. Doesn't really matter how you define those points.

You can use points, you can use lines, you can use individual planes or any combination of those three things to create and lay out brand-new planes. That's some of the fundamentals going into creating planes. Play around with it. Planes are very powerful and, like I said before, planes are going to be the fundamental building block that you're going to start all you sketches on, so I'd recommend coming up with a good system for laying out the right planes where you're going to need them, so that everything's predefined before you start doing a lot of elaborate sketching.

11/21/2014
The Weldments toolset in SOLIDWORKS helps you quickly design complex welded or bolted structures, and in this course Gabriel Corbett shows you how to get the most out of it. With simple 2D and 3D sketches, he demonstrates how to add various material types from the preloaded structural member's library and build a welded structure. From there, he covers corner options like miter and butt joints, material-positioning options like flipping and mirroring, and options for aligning and connecting the structural members.

See how to build assemblies from weldments and add gussets, weld beads, and end caps. Then find out how to automatically generate documentation such as weldment cut lists and weld tables to add to your drawings. To wrap up the course, Gabriel offers tips and tricks for fabricating your finished design, such as using standard-sized materials for quick and easy production.
Topics include: