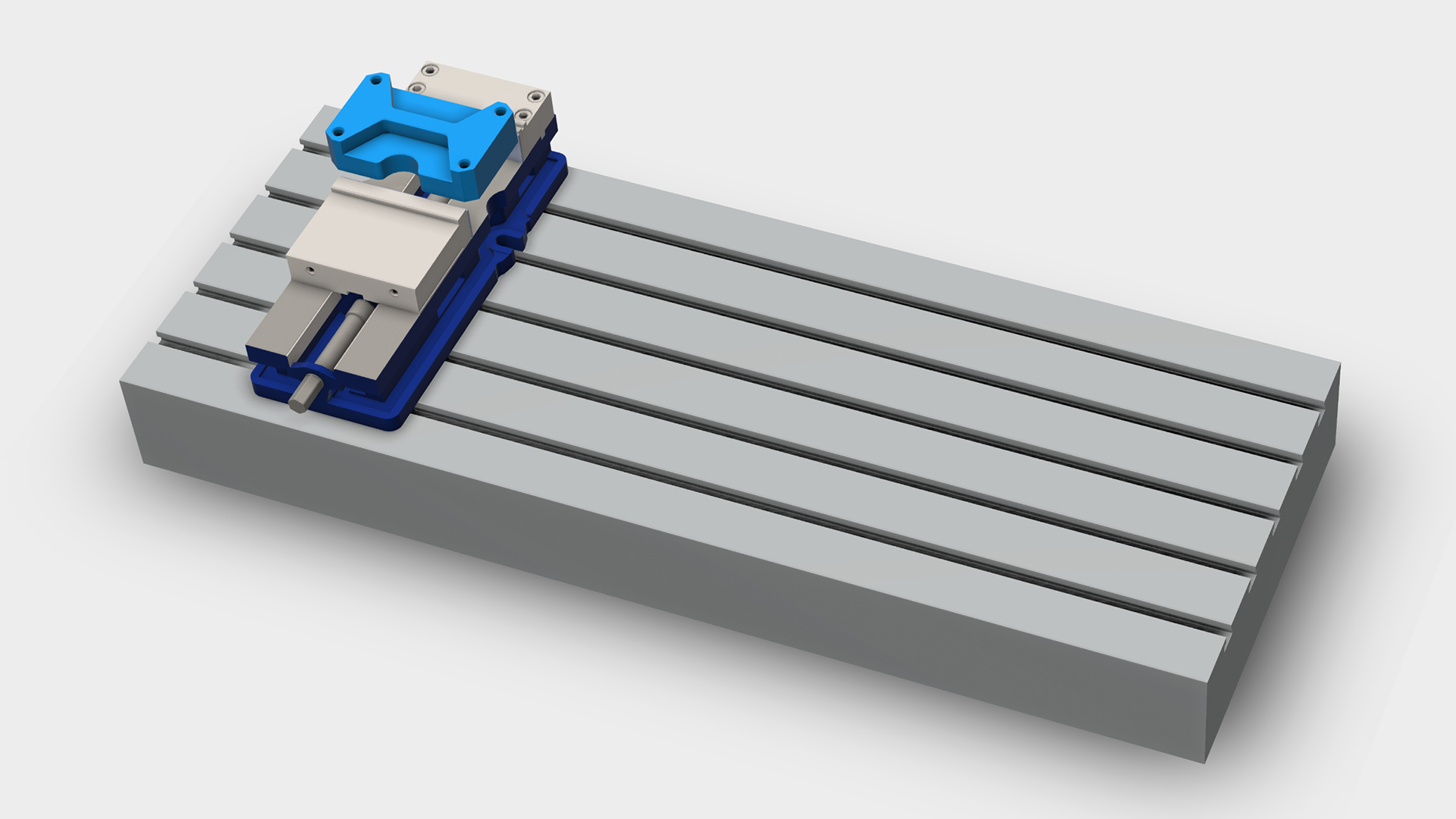 Learn how to use the Adaptive Clearing tool.

- [Instructor] In this video, we're going to be adding a 2D adaptive clearing routine. Now we use 2D adaptive clearing to remove a bunch of material very quickly. It's a roughing operation, it's not a finishing operation, so I'm going to be leaving a little bit of material on the walls and floor of my part, and I'm going to have to come back again and either run a pocket or a contour to clean that up to get to my finished size. But what adaptive clearing does really well is it gets a whole bunch of material out of the part very quickly, and it gives a very uniform and even tool load, so you're not getting big spikes in the tool load as you get to corners and things like that, your routine has been optimized for that tool load.

And really to be able to do a lot of material removal, very quickly. Let me show you how it works. Right up here under 2D Milling, click on 2D Adaptive Clearing. As far as the tool list, click on the library. I'm going to go ahead and use this 5/8 inch flat ml, but I'm going to click and edit that tool first. I'm going to actually change its too number to be tool number 11. All right, make sure that the length of the cutter is two inch flute length, which looks good. Click on OK. And then go ahead and select that tool. All right, now that I have the tool selected, the speeds and feeds that we have over here, should be just fine.

And let's go ahead and click on the geometry. As far as our geometry, I'm going to choose either this top edge right here, which goes around there, but instead of choosing that, I could actually choose this bottom surface. So there's a couple different ways you could do that, but if you choose a surface, it's going to automatically choose the entire boundary. If you choose an edge, it's going to try to propagate along, try to create a loop for you. So either way, it will work, but if you choose the bottom surface, it will automatically machine down to that contour. So that's probably a better way to go. Over here under the next tab, which is heights, I'm going to go ahead and say I'm going to be cutting all the way down to that contour.

And then the last little tab over here is going to be the things like the ramping, how I'm going to get into the part. I'm going to go ahead and just leave the defaults here, those should be just fine. Go ahead and click on OK. And it's going to generate that tool path. So there it is, you can see we're doing a very small radial cut. We're doing a big helix coming in, and then over here in the corners, you can see these little lines. It shows how it's going to be moving and kind of cleaning the material out of those corners to make sure that we're giving a very uniform tool load to that tool. We don't want to be breaking any tools, especially when we're engaging an inch and a half of flute length in our part.

So these are all the things we probably want to look at and modify to make sure we're getting optimal tool load, and getting the most material out of there as quickly as possible. All right, now, let's take a look and simulate this. So let's see what happens. I'm going to go ahead and run that. Let's go ahead and show the stock, so you can see here we're cutting into the material with a helix. Let's go ahead and speed that up. And then as soon as it gets down to the bottom, we can see it's automatically just going to be doing these big circles to clear that material out of there. Then you can see, as it gets to full size, it's only doing a climb cut.

And then when it gets to the edge here, again it's going to be climbing in. And then just going in and cleaning the corners very quickly. So those are the main things that are going to be happening when you're doing this cleaning operation here of removing all that material. Now we can go back and optimize this as far as the radial tool load. We can go back and change the depth. If you wanted to do multiple depths, we can do a whole bunch of things. But one thing I want to point out, while we're here, is if you come down here to the bottom, and take a look at the statistics, it says I'm going to be cutting this in five minutes and 18 seconds.

So about five minutes, in general. So keep that in your back of your head. It took about five minutes to do this this way. Go ahead and click on OK. Now let's go back and modify this operation. So right click on it, and say let's edit the operation. And instead of doing a full-depth cut, so over here under the adaptive clearing, I'm going to switch it over to being a 0.15 of an inch, and over here, as far as my heights, everything looks fine there. This looks fine. And then over here, I'm going to switch over to using multiple depths.

And you can see here if we show the stock. Doing pretty much the same thing we were doing before, but now we're taking a lot bigger cut. All right, looks pretty good. Now here at the bottom, let's take a look at the statistics. Right now this one says it's going to be cutting this in three minutes and 48 seconds. So that's a lot better than that five minute time we had before, so this is probably a better optimized tool path. We're taking a little bit heavier cut, we're doing it in two even steps. You're probably not getting the optimal tool wear, because you're only using the bottom 3/4 of an inch of your tool, but you are getting a faster run time.

Now can we go back and try it with a full depth of cut with maybe 100,000th step-over, sure. Can we optimize it and maybe speed up that tool a little bit, or get a little higher RPMs, or adjust our feed rates. Of course, you can always play with all these individual factors to get the optimal pocket cutting time, and really playing with those things will really allow you to see what your machine can do and how you can program it optimally to get literally huge savings in time to remove all that material. So those are a couple things to think about when you're working with and playing with 2D adaptive clearing.

Now before we do go on to the next movie, I do want to show you, you can also use adaptive clearing on the outside of your part, as well. It doesn't have to be a closed interior pocket. It could be an open pocket, for instance, or you can actually go around the whole outside of your part. Let me show you how to do that. Over here in the 2D milling, 2D adaptive clearing, let's go ahead and use that same tool. As far as my model, I'm going to choose this bottom edge, go around the outside. Come down here, as far as my depths, I'm going to go all the way down to that contour. Keep everything pretty much the same. Instead of a quarter inch step-over there, let's go ahead and change that to 0.1.

Let's see how it looks. Simulate that. Look okay. Let's go ahead and show the stock. So it's going to be going around the outside, clipping that corner. And notice it doesn't clip it very square, it does kind of a funny operation here. But as it goes around, it starts squaring up that corner, and taking a uniform load on that tool to remove that material the most optimal way possible.

And then it's going to come back and kind of clean out those corners. And then you get to that final shape. Looks pretty good. And there you have it, 2D adaptive clearing.

1/25/2018
Autodesk HSMXpress software brings integrated CAM to SOLIDWORKS. In this course, discover how to get started with this 2.5 axis CAM plugin. Gabriel Corbett walks through how to load models; set up a machine and fixtures; configure tools; and drill, tap, bore, pocket, and mill your material. He also shows how to generate toolpaths, simulate a job, use the utilities in HSM, and more.
Topics include: