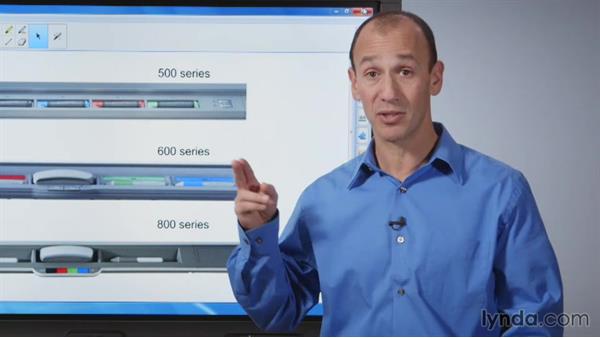 On this SMART Board, I have two pens magnetically connected and a built-in camera that's picking up my motions. Your pen tray, most likely, has either two or four color-coded pens in the pen slots and an eraser in the eraser slot. Each slot has an optical sensor which detects if there's an object in the slot. When you pick up the blue pen, you can write with blue ink. If you then pick up a red pen, you'll write with red ink, even if you retain the blue pen in your hand.

The SMART Board will know which tool was removed last, and defaults to that tool. Please be aware that the pen is only an object that blocks the light sensor. And that you can write with anything including your finger. If you lose a pen you can replace it with any object. Like a dry-erase marker that will block the optical sensor. The pen tray also has a button to launch the on-screen keyboard, and a button that will be your right-click button. On your board, pressing and holding the screen will also act as a right click and give you the same right click options.

Lastly, some pen trays have a Help button, that gives you access to a help and support menu. One of the first things you will do when you connect to your SMART Board, will be to orient it. Orienting allows the computer to recognize where your finger is touching in relation to the projected image. Without proper orientation, where you're touching will not coincide with the object you're trying to touch. And this can be really frustrating. As a general rule, I will orient my SMART Board whenever I first connect my laptop to my SMART Board.

If my laptop or desktop was already connected, then I'll orient after I've started up my laptop and turned on my projector. If your projector is mounted on the ceiling and the ceiling moves when the heat comes on, then you might find yourself out of orientation and need to orient more often. The easiest way to orient is by holding down the Right-click button and the Keyboard button at the same time. Some models of SMART Boards have a designated Orientation button on the pen tray, like mine. So I'm going to go ahead and click my Orientation button, and you'll see that targets appear on the screen.

The nine targets is the default number of targets. Finishing my orienting there, and I'm ready to go. So now that you're familiar with a pen tray, and you've oriented your SMART Board, you are ready to begin. 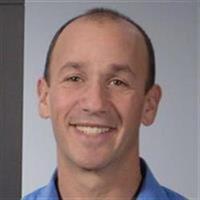 1/30/2014
The SMART Board interactive whiteboard, through its touch-sensitive surface, gives you access to all the functions of your computer while presenting to your audience—making it great for teachers and other professionals who need to share different types of material. Join SMART Certified Trainer Steve Blatt as he shows how to use a SMART Board in conjunction with SMART Notebook software to design and organize dynamic presentations. Learn how to connect to your computer, manage objects, insert graphics, and dazzle your audience with reveals.
Topics include: