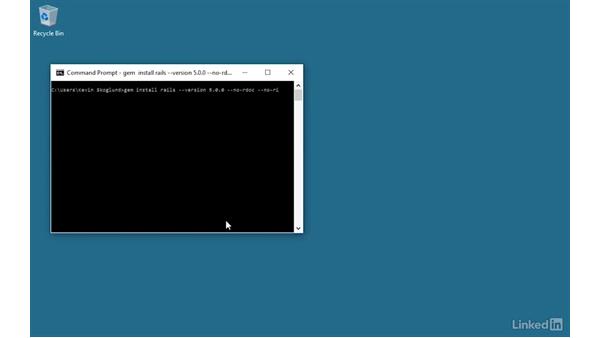 - In the last movie, we took a look at RubyGems,…the package manager for Ruby libraries.…And now that we have RubyGems installed,…it's going to make it really simple…for us to install Ruby on Rails,…'cause Ruby on Rails is itself a RubyGem.…Let's go to the command line and see how.…So from the Command Prompt,…I'm just going to type cls…just so that we clear our screen, we'll start fresh.…And we already have RubyGems installed,…we saw that in the last movie,…so now we just want to install Ruby on Rails,…and we can do that with gem Space install…and then rails.…

That's all you have to do to install any RubyGem.…You can go to the RubyGems website,…find out the name of the RubyGem,…and then you just type gem install…and the name of the RubyGem.…Now I'm going to add an additional option here though,…which is a Space and then --version…Space 5.0.0,…that's the version of Ruby on Rails…that this tutorial is going to be for.…Now if you just type gem install rails,…by default it's going to get the latest version,…and I don't know when you're watching this.…

12/5/2016
Learn to install the software necessary for developing projects in Ruby on Rails, the popular web application framework. This course is designed for developers and other users who want to install and configure Ruby on Rails 5 on their Windows PCs. Kevin Skoglund shows how to set up a complete development environment, including Ruby DevKit, RubyGems, and MySQL. Then he demonstrates how to select an appropriate text editor and get started creating and launching new Ruby on Rails projects.