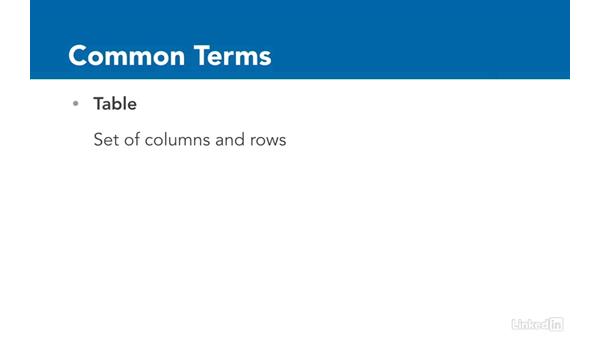 Learn the fundamentals of working with databases. Get an overview of database terminology, such as table, column, row, field, index, and foreign key. Learn the four fundamental ways we interact with a database: create, read, update, delete (CRUD).

- [Narrator] During this chapter we will learn to work with databases and to create database migration files. We'll begin by looking at the fundamentals of working with databases. In the last chapter, we learned about the main loop of the request response cycle. From the Browser, to the Controller, to the View, and back to the Browser. Over the next few chapters we're gonna shift our focus to the model and the database portion. We could start by learning how to create a model without a database first, and then add database connectivity later. But, most models and rails will be connected to database tables.

And in real world development, the process of creating those models usually begins by defining the database tables. So, that's where we'll start, too. If you've never worked with a database before chances are good that have worked with a spreadsheet like Microsoft Excel. A database is similar in that it has columns and rows which are populated with data. A spreadsheet page is what we would call a database table. And you can have multiple tables the same way that spreadsheets often let you have multiple worksheets, or tabs, that you can switch between. The spreadsheet columns are the table columns which define what data will be stored.

For example, first name, last name, company name, address, etc. The rows are the individual records. If I have 20 customers then I would have 20 rows. Each row can have data in each column. While this can be a useful analogy, databases are not spreadsheets. A database can define and traverse relationships between tables. That's the relational aspect. It's very powerful. Spreadsheets don't give you that. The other big difference is that, when working with databases, we're going to be issuing commands in order to interact with the database.

With a spreadsheet we have it all laid out in front of us and a visual medium where we can see those tables with their rows and columns. In databases we don't have that. We're going to have to be working with subsets of the data all the time. And we can ask the database to show us the information we want. We're going to be issuing commands and it's going to return data back to us that we can then work with. And perhaps, it goes without saying, that spreadsheets are optimized for adding numbers. That's what they do best. Databases are optimized for working with data and the relationships between data.

That's what they do best. If you are new to databases you may be wondering how much SQL are you going to need in order to interact with the SQL database. It is possible for you to just follow along with me and stumble through the unfamiliar parts and still make it work. But, ideally, you should go and learn some SQL on your own. Rails is going to provide a very friendly layer over SQL so that you don't have to write SQL very often. But it's going to be helpful to understand what Rails is doing for you behind the curtain. And every now and then the SQL does still show through and you will need to write a little bit of SQL on your own.

There's a special vocabulary that's associated with databases. Let's walk through a few of the most important terms together. Not only will it make sure that we're all on the same page, but also give you an idea of how these terms fit with the Rails framework. First, we have a database, which is a simple set of tables. It's not the same thing as a table. Sometimes people use those two words interchangeably. A database is a collection of database tables. In Rails, one application typically equals one database. It doesn't have to be true, but at the beginner and most basic level, it is true.

Our sample application is going to be working with only one database. For example, the database might be named simple cms development. The name is typically all lower-case with underscores, which is the convention in Rails. We can, of course, configure it to use something different if we want. Databases are the level where we grant access permissions. We won't have specific table permissions so that some people can view some tables, but not others. We're gonna give our Rails application permission to access the entire database, and then we'll let the application code decide whether a user ought to be able to access certain information and certain tables, or not.

If the database is a set of tables, then a table is going to be a set of rows and columns. In the Rails framework, one model equals one table. As I mentioned before, we can have models which aren't connected to databases, but, most of the time, every model has a corresponding table. The model and the table represent a single concept. A noun, the what of our application. For example, in this simple CMS that we build, the nouns might be users, subjects, or pages. These table names also are all lower-case with underscores, and they're plural, because the table will contain many of this type of item.

We have many subjects in a subjects table, so we pluralize it. Again, you can customize the table name, but this is the Rails convention. Tables are where relationships are going to be defined. We'll talk more about relationships in just a moment. The next term we have is column. A column is going to be a set of data of a single simple type. In the Rails framework, a single attribute of a model is equal to a column. For example, first name, last name, email, and password, would all be attributes of our user model.

And they would all be columns in our table, as well. And when I say that a column is a set of data of a single simple type, what I'm talking about are data types like strings, integers, dates, that sort of thing. A table is made up of columns and rows. The rows are the data. Each row is equal to an object or an instance. In the case of our users, a row would be all of the data about one user. So, we might have, Kevin, Skoglund, an email address, and a password that correspond to each of those columns; first name, last name, email, and password.

Next, we have field, which is an intersection of a row and a column. It has a single value. An example might be the first name field. We have the value Kevin. Often field is used interchangeably with column. So don't be surprised if you hear me say field instead of column, or column instead of field. Next, we have index. An index is a data structure on a table to increase the look-up speed of data inside that table. It's like the index at the back of a book. It lets you find rows in the database very quickly.

Next, we have foreign keys. Foreign keys are an important concept when working with relational databases. A foreign key is a table column whose values reference rows in another table. They relate rows in one table to another through this reference. These relationships that foreign keys provide is why we call them relational databases. An example might be if we had a pages table. We would have a subject ID in that table, which would reference the ID of the subject table.

Notice that it uses a singular foreign table name. We don't say subject's ID, we say subject ID. It corresponds to our subjects table and then we put ID at the end. Again, this is the Rails convention and it can be overwritten. If you'd worked with databases before this is going to be a familiar concept. If not, don't worry. We're going to come back to it in greater detail later. You do always want to remember to put indexes on your foreign keys. Remember, indexes help you look up information quickly so this will give us access to those relationships as fast as possible.

Next, we have schema. The schema is going to be the structural definition of a database. It defines the tables, the columns, the indexes, everything that makes up a database. So, when I talk about the database schema that's what I'm referring to. And the last term that I want to introduce you to is CRUD. This isn't specifically a database term, but you're going to hear me saying it a lot in upcoming chapters. And it's an acronym for Create, Read, Update, and Delete. These are the four main ways that we're going to interact with the database.