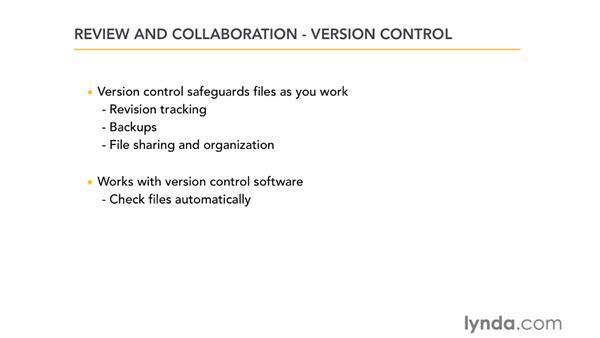 RoboHelp_9 has a number of review and collaboration tools built right in, so in this chapter we're going to focus on collaborating on a project with others and some of the review functionality that's built in. But before we get into all of that, we should also mention something called Version Control. If you're going have multiple authors working on a project you might want to control how the files are actually accessed. For example, maybe only one person should be working on a file at a time. Well, Version control software does safeguard files as you work.

So it does provide revision tracking so you know who's been working on what. It will only allow one person to work on a file at a time. Sometimes it can even make backups and provide file sharing and organization functionality as well. Now just so you know, RoboHelp does work with third-party version control software that's out there to check out files automatically if they're not already in use, and even track their use. Version Control software, by the way, if you're looking at third-party options, they have to support the Microsoft SCC API, otherwise they won't work with RoboHelp.

7/21/2011
In this course, author David Rivers demonstrates the core features of RoboHelp 9, the industry-standard authoring tool for creating help systems for desktop or web-based applications. The course shows how to work with RoboHelp pods, save custom workspaces, create new projects, and leverage existing content in other formats, such as Word and PDF documents. It also includes tutorials on merging projects, topic formatting, using graphics and multimedia, and using forms and frames.
Topics include:

Q: When I insert the ActiveX Calendar control and try to hide the title by setting the ShowTitle property to false, the title is not removed and remains visible. Why is this happening?

A: There are many ActiveX controls available and many versions of a control may exist. Different versions of a control can behave differently. Certain properties may work in one version of a control and not in another. ActiveX controls can be installed on your computer by different programs other than RoboHelp, such as Microsoft Excel and Access. In this title, version 11.0 of the Calendar control is used. If you are using a different version of the Calendar control, the ShowTitle property may not work properly. Go to www.microsoft.com to learn more about ActiveX controls and their properties.