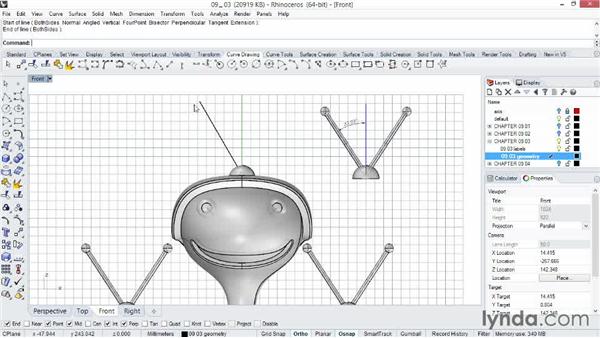 Next up let's take a look at the ortho…modeling aid located at the bottom of the screen.…The ortho modeling aid or snap is simply an angle constraint.…This is used to verify that any geometry being created or…moved, is done along a specified angle which is usually 90 degrees.…Go ahead and click the ortho right here at the bottom.…We've been informed that turtle boys is having some communication issues.…We need to re-design his antennae for a different angle.…Let's try to draw a quick line in the curve drawing lines.…I've got my point snap on at the very bottom.…

So I can start from here.…As I draw up, you'll notice it's going…veritical, even though my cursor is off the side.…And now, I'm jumping 90 degrees either way.…That's not a useful ortho snap. Escape out of this command.…Let's go to the options, and see if we can change that.…Going up to tools,…options.…Under modeling aids is where the ortho snap is controlled.…You can turn that actually of and on right here.…And here's the default 90.…Let's put it to something a little bit smaller and more useful, like 30 degrees.…