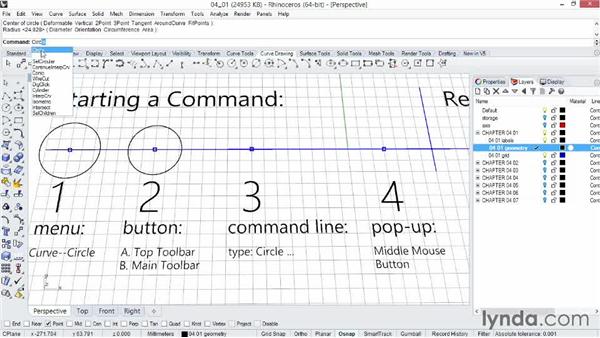 In this video, we'll highlight the flexible nature of the Rhino interface. This flexibility means that you have the ability to run commands in any of several different ways. This gives you considerable freedom, although it can sometimes add to your initial intimidation or even confusion. At a bare minimum, you'll have four different ways to start any command, and then two additional methods you can use to repeat those commands and speed things up. We're going to be building a circle just to test out each of the different ways to start a command. First off though, I'm going to turn some O snaps on down here at the bottom. That's for object snapping, and just put the point object.

You'll see why in just a second. And so we'll zoom in here to the first. So I mentioned the menu, this is up at the top. We've got curve. Circle, let's do the center of radius version. So it's looking for a start point. Now we're snapping to that. There's our very first circle. Okay next up, we can start a command with buttons. Over here on the left side is our main menu. So the circle is so common, it's already there. But I want to actually modify my toolbar. I don't see any way to draw a curve right now.

We have curve tools, but not curve drawings. I'm going to go ahead and add that, dock that inside. So I'm going to right-click in a blank spot, show toolbars, and here's curve drawing. Just select it, click away, we get a new toolbar, it's kind of floating around so we can grab the tab. I'm going to dock that right in, right next to Curve Tools. To be used in close approximation of each other. We'll typically draw something and then maybe do a tool to edit it. So here's our circle from center radius command. And so there we have drawn one using the button.

Next up is the command line. So if you don't have enough space here at the top you can also pull it open a little bit more. I always try to keep about three lines visible because a lot of information will show up and you want to be able to see that. I'm just going to type in circle, and so it fills it automatically for you. Don't forget, a lot of commands have multiple options and they'll be appearing right here at the command line. You can stop and take a look, and that will be a lot of your variations on commands. ' Kay, just now do the same circle. This is pretty handy, I don't think we've covered this much, is the pop up menu so if I use the center button or scroll wheel on most mice, we get this little mini pop up menu.

It's really cool' cause it just pops up where ever you're pointing. You just pick something and it goes away. So what we're going to do is make a slight modification to that. So I'm going to hit the right button over here, and I'm going to click on the top so it doesn't disappear, and you can click on any button you see. Hold down Ctrl is important, and drag. So it just makes a copy, you don't want to hit Shift because you don't want to move something off and kind of mess something up. Right, so we can close this now just to demonstrate. So the next time I'm drawing, and I hit the center mouse button, there's that circle.

It can be pretty fast. Now repeating is pretty nice too inside of Rhino. So there's three ways to repeat the last command. You can always hit the space bar, right click or hit the enter key. All of those pretty much do the same function. So, I'm just going to hit Space Bar. And it repeated that circle. You can see it up here at the top of the command line. Pretty straight forward. Now, a little more powerful way of repeating commands, and this works better when you're doing like three or four or five different commands. You're going back and forth. You're not repeating the same one each time.

But you're using a small group of three or four commands, or more. Right-click up on a blank spot of this command line. And this will show you the last ten, 15, sometimes 20 commands. So I've only done a few. But there's my circle. None of these four methods that may be used to start a command are inherently better than the others. It's really a personal preference that you will develop over time. As the course progresses, we'll see each of these entry methods used at different times.