Setting the stage for lighting 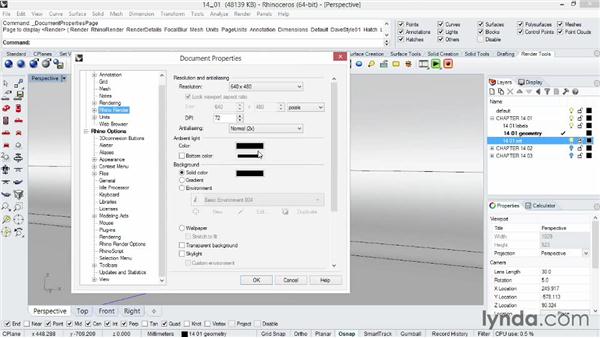 Join Dave Schultze for an in-depth discussion in this video Setting the stage for lighting, part of Rhino 5 Essential Training.

In this first of the rendering videos, we'll focus now on presenting our 3D work in CG Renderings. Two points to consider. Rendering is an art form and it takes lots and lots of testing and tweaking. You definitely want to render along the course of the project and also save a lot of time at the end to do more. There's going to be more settings here that we can cover that I'll also share all of my most excellent and awesome tips, developed over many, many years. Let's turn on our rendering toolbar, which is not usually open. So I'm going to right-click on a blank area, Show Toolbar, scroll down.

It's a long way to render. There's the Render. I grab the tab and dock it up here at the end. Now let's talk about this stage set. Right now would not be a good time to render. Because we have got the spacecraft floating in white space. So it's fairly important to have some sort of ground plane or backdrop. So it has an environment. One reason is, it would catch shadows and or show reflections. It just can be disconcerting, seeing something float in space. And it looks more interesting, when grounded.

A couple ways to do that. First one is this built-in ground plane. So open up this panel here. Just going to turn it on briefly. So this is kind of a infinite flat ground plane that goes off into the horizon. But, I don't think I want to use this because I want to get pretty low, and I don't want to see that edge. Let's turn that back off. I've already got a set prepared here. I'm going to turn on the Set layer. I'll zoom out, you can see exactly what's going on. So it's kind of like what you'd see in a photography studio. Which is a paper seamless. And it curves up and out of sight.

It also extends both ways, so you won't catch that edge. The way it was constructed should be obvious here. It was just a blue line I drew. That's a free form control point curve, and just extruded sideways. Lets zoom back in. You can kind of see why this works so well. This is the best for kind of low angle shots. So things are more dramatic when you're at or below this middle section. And so here you see our limits. We don't want to rotate too far. I want to keep that backdrop behind us.

Let's talk about the other environmental variables. I'm going to go over to the rendering ball here. I'm going to right-click to get the settings. So the first thing I want to change is ambient light. I'm going to turn that to black so what that is doing is creating no light coming from the room rens so think of a photography studio once again you want to have extra lights except for the ones you want. I'm also going to have the background be a solid color that should be black. And then, for our lights, we're going to turn on the Skylight.

So the skylight is, just so that I've got an imaginary dome over your scene casting kind of a gentle glow everywhere. So you have kind of wonderful soft shadows. So just to recap. I'm controlling the lighting with three of these settings. No ambient light. Black as a background. All the light will be coming from a skylight. Next up, I want to modify the size. Typically prefer to go custom. That way I can lock the aspect ratio. What that does is, view port behind us, that looks at the size, and then I can dial that up or down.

So that lock keeps them fixed in size. Probably bump it up to about 900. So there'll be a nice kind of wide screen look. I hit OK, do a final adjustment here. We're just about ready to render. Get low, get dramatic. Even do a little bit of rotation if you want but make sure that back drop doesn't get exposed. Okay, let's start the rendering and click on that same blue ball there.

So let's take a few minutes while we render. A few more notes. Rhino has some very nice built-in materials and environments, but I think it works much better to make our own materials manually and learn in the process. But, by all means, you should feel free to explore the various libraries located on the Render Tools toolbar. We now have our environment settings and backdrop in good shape. So we can talk about other key settings. Number one is to design an interesting model with plenty of detail, which should include edge fill-its. If you have lots of sharp edges, it's a dead give away that the model is not yet finished or you maybe an amateur.

The other two keys are materials, and lighting, which we'll be covering next. I'm going to pose this abit and (INAUDIBLE) let the rendering finish. Alright, our rendering is finshed, lets take a look. First thing I notice is that we have absolutely no materials anywhere in very soft even lighting. This gives a result of kind of like a Mononymic view, but actually that's a good thing. This is a great ways of focus purely on a design and form. It's a similar strategy to using all those black layers and previewing the view port in grey tones. I call this technique neutral form render and always use it before I begin to experiment with colored materials later. 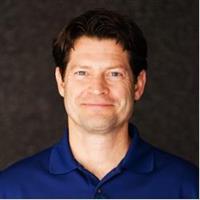 Video: Setting the stage for lighting