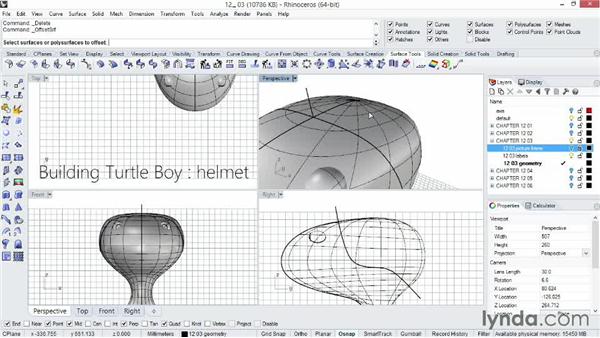 Next up, we'll explore another patented technique for making…complex surfaces fast and beautifully from geometry that's already existing.…Let's make a helmet for Turtle Boy.…So before we start, just a reminder. I've got two picture frames on here.…You can see them in the Perspective viewport.…make sure those are locked.…They're way too easy to accidentally select them…and then move them or even delete them.…But I'm going to be doing my work here in the…right view port, and I've got it set to Wireframe.…We're going to do a control point curve.…

So the key here is to start outside where you want it.…So it's a very clean and obvious intersection.…Also it's starting to snap to different objects…so I'm going to hit Alt so it'll ignore those.…(SOUND)…That looks pretty good, I think you can leave it at that.…Okay, the next step I want to somehow use that to split the head.…But we need to get that curve on to the surface as the best way to do it.…So I've got this toolbar open, which we've recently used.…

But if t's not you can just right click Show Toolbar and select Curve From Object.…