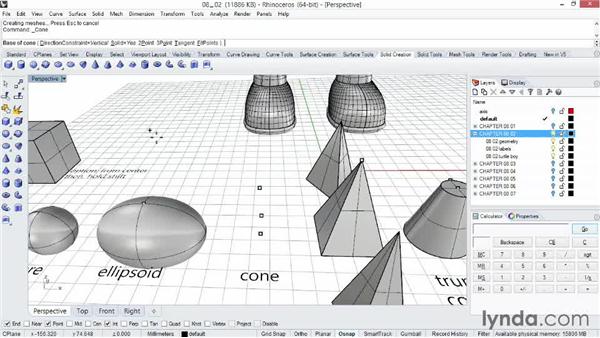 In this next video, we'll take a scenic tour of the built in Solid commands. Which allow you to build primitives directly or via single command. Examples of primitives include spheres, cones, boxes and many, many others. By using these commands the result is Geometry that has a primary characteristic of a solid. Closure. In other words, it is entirely closed and will have no openings or gaps. If I zoom in here, we're going to start to build over on the left side. Also, I've got some points already set up so it'll make things go a little bit quicker. But make sure if you're going to follow along, you've got the point O snap on, and you're on the solid creation tool bar.

We'll start off with a basic box. Just going to snap each corner, one at a time. That's all there is to it, but I'd like to show you a cool little trick on this to get a variation. So, I'm going to start the command again. This time, I'm going to select center as one of the options before I start drawing. Go to the intersection. And as I draw out, I can have any dimensions I want, but I'm going to hold down Shift. So that'll keep the two the same. Same x and y. Now I'm going up vertically. If you look at the Command line, hit Enter or the right click on the mouse, it will match the height and width to the depth.

All three are identical, so it's a perfect cube. Next up is this sphere. I'm going to pick the first one which is the default Sphere Center Radius. Snap to the center, go off a little bit. Basic sphere. Let's move along to elipsoids. This is located right next to the sphere. These are a little more challenging because they have a lot of axis on here. We're actually picking like four different points. And we're going to build a quick cone, pretty easy to spot. You have to establish a base and then a height.

Don't forget you can type in numbers at any point along this process, to get exact dimensions. Kay, that's enough building, let's just take a look at some of the other ones we've got. Pyramids, truncated cones, cylinder, tubes, and a torus. Okay, let's build a few primitives, on the backside of turtleboy. Looking like he needs a jet pack. So I've got some additional little point objects here. Going to help me out. Let's give him a gas tank. So we have the basis cylinder we're going to snap there.

Come up, pretty easy. Next up, I want to put a sphere. We're going to use the same snap. I'm going to demonstrate a problem that occurs very commonly. So as I get close to edges, it's starting to snap all over the place. If you hit Alt while you're moving, it turns off all the O snaps, just kind of ignores everything while it's being held down. Okay, finally, let's do a solid tool. We're going to get into this more detail, but it's a good little preview. Solid tools. We're going to do the boolean union.

Now we'd only do this when the design is pretty much complete and set. Otherwise I'd like to keep modelling and let things just be overlapping. I think that's a great way to go. But, assuming this is complete, let's do the union. I select the two objects, right click, and now they're one continuous closed solid, just like the two original parts. The solid primitive commands make it very easy to build quick and clean geometry. But, you'll definitely want to avoid stopping there. I recommend continuing to add more detail. Like fillets, chamfers, or part lines.

In order to make your model more interesting and realistic.