Exporting to the STL format for 3D printing 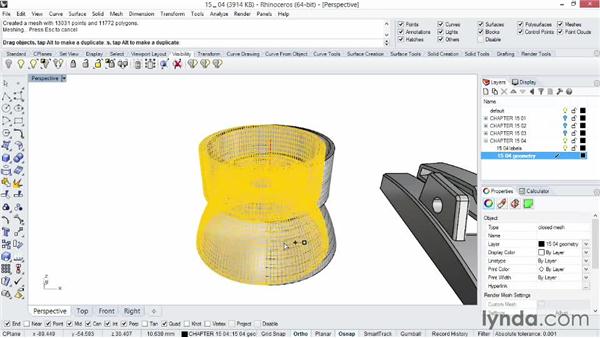 In this video, we'll take one of our parts and review the steps required for prototyping. The goal here is to export to 3D Rhino Data, to a file format called STL. Which stands for Stereolithography. Which is the name of one type of prototyping machine. Also, you'll see the STL file format is a polygonal mesh. Let's zoom into this engine here, we've already created. So the quick process would be just to select the object. Go to File > Export Selected.

But I've actually got an improved process, and it requires one extra step before we go here and export. So instead of doing that, I'm going to back up a bit. I'm going to select this object. What we're going to do is we're going to convert it to a mesh inside of Rhino. That exporting I just showed you would have sent it out to another file, and we would have a reduced opportunity to review it. We're going to make sure there's no problems, which can sometimes happen. It's not that often. So let's go up to the Mesh menu. And we're just going to make it from a NURBs object.

That's just for illustration purposes. I'm going to crank this way down to low. We can preview it but a lot times, it's difficult to see what's going on because it's right on top of the NURBs object. We'll hit OK. What I usually like to do is move it away. And then kind of check it out. And you can see it's kind of faceted, it's no where near as smooth as a NURB surface. I'm also noticing, some of these faces are very long and skinny.

And so that's going to cause potential problems. So we'll solve that issue with our next export. So I'm just going to select it and delete it. I'm going to repeat this again. Go to Mesh > From NURBs. I'm going to crank it up. Let's do another preview. If the question comes up, how much smoothness do I need? Well if it turns perfectly black, that's too much. So you want to have a little bit space inside here. I'm going to jump over to Detailed Controls, and I'm going to address that issue with a long skinny polygons. So that's controlled by Aspect Ratio.

So if I type in two, that's going to make the maximum one by two. So if I do a quick preview. You can see there's more squares now. And that'll hopefully keep our shape a little bit smoother overall. Let me go ahead and hit OK. Then we have to deselect and reselect to get the mesh. going to move that outta the way, so we can do a little inspection. That looks much smoother. If you want to get an even better idea, what I usually do is. Go over to a rendered view.

And it almost looks exactly like a NURBs, even though it's a lots and lots of tiny polygons. So besides the visual inspection, we can also do our similar volume check. So I'm going to select this mesh. And Analyze > Mass Properties > Volume. And it's nice to see that it actually is still closed. You can occasionally have a little glitch. If you do have a problem here, what I recommend is throwing away this mesh, going back to your model, and fixing whatever you see. For example, it could be a face that's flipped around. So just throw that away with an extraction and rebuild it, then try your Mesh export one more time.

You can also modify the Mesh resolution. So crank it higher or lower, sometimes that fixes it, too. Okay, since this is past inspection, now we can go to the File Export Selected. I'm going to put this on the desktop. And we're going to look at all the different file formats Rhino can deal with, which is pretty amazing. But we're going to go to STL for now. I'm going to call this Engine, and save it. Let's go ahead and accept all the defaults by hitting OK.

So that file is now outside, which should be identical to what we've just previewed here. Let's go to the Desktop and take a look. So here's the engine. Now it's only one megabyte, our Rhino file is many times bigger. What I recommend doing before you send this out, is to zip it. It's going to actually get many times smaller again, and the reason is this STL data is actually, it's just a series of points and lines so it's very easy to compress. We'll send it to a zipped folder.

Give it the same name. Let's check that out. So you can see it got 2 3rds smaller again. The reason I recommend zipping your data, is to protect it when you send it via email. 'Kay, let's go back to Rhino. So the prototyping process is a fantastic way to study your design and see how well it works. It's especially useful when you can identify problems and fix them long before it gets manufactured, which would be very embarrassing and expensive. Fortunately, it has recently become possible and cost effective for individuals to buy their very own 3D printer.

And some models sell for under a 1,000 bucks. Even if you don't have your own printer, you can still email the STL file we just made, to a place called the Rapid Prototyping Service Bureau. They will print out your parts in just a few days and most of them offer painting and assembly service as well. Nice.

Video: Exporting to the STL format for 3D printing