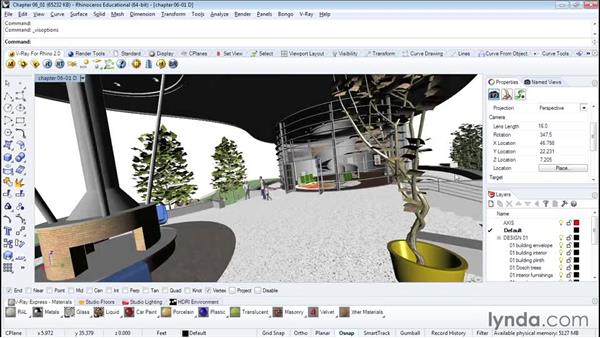 - In this first video of the camera and rendering chapter, I will highlight some key strategies and settings. These should help keep you out of trouble and increase your odds you'll make a sweet render every time. The first thing I want to mention is your foreground and background should be combined to add more depth and interest. Here we're seeing people close by, the building in the kind of mid-ground with a little bit of trees in the background. This will really help add that third dimension to what is otherwise a 2D image people will be looking at later. I have another example already saved here.

Let's jump over to this name view. So here's kind of an extreme example. We have a lot of elements really close, everywhere in between and then far in the background. You might have noticed that this is tipped a little bit and I've done that because I want to add a little extra drama and also, I'm not going to be compositing. We already discussed how if you will be compositing and adding more 2D elements, then you definitely want to have a level camera with the horizon as close to center as possible. We already did that previously but let's take a quick look.

So this is an example of the camera setup with everything perfectly level and the horizon right about here, in the center of the screen. Now if you like that tilted look, it's pretty easy to do. I have a 3D navigator, so that means I don't have to go into the software at all, but for most other people, we're going to go here, to the viewport label and then and then under "Set Camera", we're going to click on "Tilt view". This will give us a little hand here and we're just going to tip this guy side-to-side.

This can add a little bit of drama but it's also very easy to abuse so don't go too far. This is kind of what I call the "comic book angle". The other thing that's camera related but only partially is the lighting, we talked about that extensively in Chapter 3 but I've personally found that focusing on the lighting first then makes your camera setup so much easier. So I highly recommend you focus on doing those test renders with the material override, get your exposure correct then you can start moving the camera around. Ok, if you've done a lot of tilting, let's do that one more time, I'll right click here and go "Tilt view".

This happens to a lot of people, they tilt it and then they come back later and change their mind, so how do you get it back to the original position? Good question. We're going to go over here, we're going to go to "Set View" and just click "Perspective", that'll reset it back to all the defaults and it will be level as well. Let's jump back to some of these named views so we can take a look at what the rendering looks like. I'll start with this one here, since the rendering is already done we'll just jump over and I've go the rendering already done so let's check it out.

So here's the rendered view, I think this is pretty dynamic and engaging unless, of course, you don't like tilted views. If that's not your cup of tea, not a problem. What I really enjoy about this is we've got some dynamic action, we've go the sun coming in behind us got some long shadows. We've got elements close, elements near, off to the side and far, far in the background. This little bit of tilting can be a great strategy Here's how it looks on the inside. I've found this can add quite a bit of drama, hopefully you agree. So that's it for some of the strategies so let's talk about specific camera settings.

Let's go back to Rhino and I'm going to access the settings over here in the V-Ray toolbar, clicking "o" for the options. Most of the settings we're talking about are right here under "camera". That last rendering was at a shutter speed of 60 but typically, if I'm indoors, it's around 30. Outside, it's either one over 250 or 300, everything has pretty much been identical for the entire course. We've got an F Number of eight, film speed at 100. Now let's talk about lense length. I'm going to go ahead and close this so if nothing is selected in a viewport, we can click over to a blank area just to be sure, then the properties will show your lens length.

I don't use much of a range, I found that anything below 20 gets very distorted. Let me type in something right now, I'm going to maybe type in "16 millimetres" and that gets a little bit funky, especially as you get close to objects, you really kind of get fish-eye distorted. So I'm typically for my widest angle around 20 or 24, that seems to be more real-world appropriate. Then for shots that are further away, I'm typically going to spend most of my time at 30 millimeters.

That's important to know because by default, you're Rhino camera will be at 50 millimeters. I find the 50 millimeter setting just not dynamic or engaging enough. You can kind of test that out if you're interested. You can type in like 100 or 200 millimeters to get a telephoto and notice that everything becomes extremely flat so since we're rendering images, we want to kind of exaggerate, but only slightly, the 3D effect. So I found that somewhere between 24 and 30 is the sweet-spot. Maybe a little bit smaller, maybe down to 20 if I'm indoors and want to open up the lens a little bit more.

You probably noticed that I'm doing a lot of these named views, this is actually critical for my workflow and I recommend it for you. Let's say you're moving the camera around, you find a really good spot, chances are when you come back to Rhino, the camera will be moved or it's going to be just gone or be called "perspective" or be another Viewport name. So I recommend you save the awesome shots so when you come back, you can continue working changing materials or fixing the lighting and getting the render from the same exact spot. To save the named view, this one is looking good, just go over to the "Named View" panel, click on save, we'll give it a name.

Just call it "test", it gets added to the list which is kind of nice because there is also a little icon here. So imagine you've closed Rhino, you came back a week later or whatever, boom, you just come into this panel, double click on "test" and it goes back to the exact same spot. It also includes what your lens setting is and that's extra nice. The final camera setting I'm going to talk about is called "Lens shift", let me show you where that's located. So down here we have a setting called "Lens shift" that typically is at zero which means nothing is happening.

I'm going to get this out of the way and I'm going to jump to another view here. So here's the view I want to talk about. I purposely had the camera fairly low and looking quite a bit up. What you'll notice is the vertical lines here in this building are converging so we have kind of an exaggerated perspective. Not a problem but there's a way to fix this so that all the verticals stay pretty true and parallel. This is kind of a big deal for architectural photography so now we can do this in 3D. I'm going to show you, right here, this line is converging and this is another line here.

There's a point in space where they'll converge and again, this may be a personal preference, we'll take a look at it in both ways but here's how you control it. You go into the V-Ray toolbar and there's a command here called "GuessLens Shift" I'm just going to click on that. It looks like nothing happens at all except when we render. We can also take a look at the options here. Notice the lens shift went from zero to 0.1997. So that's the lens shifting or distortion that V-Ray's calculated is going to correct for those converging vertical lines.

It's kind of a weird name to call it "GuessLens Shift" because I've never come up with a better solution than when I click on that. Also, by the way, this can be positive or negative, depends if you're looking up or down. I've got this rendering done both ways, at zero and at 0.1997 so let's check that out. Ok, here's that exact shot with no lens shifting at all. I'm going to jump to the next page which has that 0.1997. So you can see that the corrections sometimes look a little bit off because you're so used to this distortion but keep in mind this is kind of another personal preference so you can kind of decide if it works for you.

Again this is no correction at all, this is a little bit and just for fun, here is a render where I accidentally typed in "one" instead of zero so you can see this can give you some very amusing, fun-house effects. These basic strategies and settings covered may not work for you 100 percent of the time but you should be in great shape 99 percent of the time. Consider these are a solid place to start and help you mastering the basics. Once you get a little more comfortable, then you can start improvising and break a few rules.

12/5/2014
A detailed rendering job can make your building models look more realistic and professional—and help sell clients on your ideas. This course teaches everything you need to know about rendering interior and exterior architectural scenes with Rhino and V-Ray. Using a pavilion of his own design, author Dave Schultze shows how to set up Sun, Sky, and V-Ray lighting systems; apply glass, metal, stone, and wood materials; and insert trees, grass, and people for additional scale and interest. Plus, learn how to use cameras and compositing techniques to add a sense of depth and realism to your designs.
Topics include: