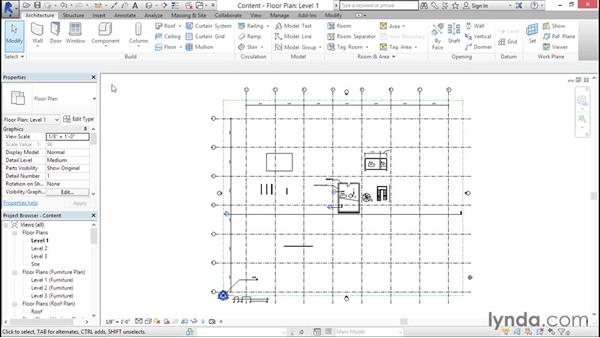 Join Paul F. Aubin for an in-depth discussion in this video What content to (and not to) include?, part of Revit Templates: Content.

- When devising office standards, the question of what to include is always an important one. In this movie, we will focus on the so-called loadable items. In other words, we will discuss the families that can be loaded into the file using the Load Family command. And we'll be talking as much about what to include as perhaps what not to include. So, I'd like to show you a few examples in the file that I have here onscreen, just to kind of get you thinking in the right frame of mind. So, really the main goal that we want to get at here in this movie is what experience do you want your users to have when they create a file with this template.

With the system families, there's really not much that we have to do there. Because every system family is already part of Revit. But when it comes to the loadable families, those families which we have to load in externally, we have to make a conscious decision about which ones to include. Now, if you're not sure exactly which ones are which, let's quickly review that. So, there are some obvious examples. Things like walls, roofs, ceilings, these are system families. So, those are already here and if you followed the Creating Revit Templates: System Settings course, then we've already discussed those at length in that course.

So, you can go back and review those movies there for more information on that. But when you talk about things like doors, windows, columns, furniture, equipment, these are loadable families or non-system families. It's actually possible to have a project file that doesn't have any doors in it all, or doesn't have any windows in it at all. And if you hit upon one of these categories that doesn't have an item loaded, then Revit will display a dialogue and tell you that you don't have that item loaded and would you like to load one now.

So, one way that you can tell is by going to the button in question. And so, for example, if I click the Wall button and I look over here, there is no Load Family button. So, that's a system family because it doesn't have the load option. But if I click the Door button, there's a Load Family button right here. So, the easiest way that you can tell whether you're dealing with a loadable family or a system family, is just to look for that Load Family button when you run the command, okay? So, that's basically what we're talking about here is those loadable families.

Okay, so this particular file, it's already got a few doors. So, there's a couple doors in here. I'll cancel out of there. It's got at least one window. You notice it's just a single fixed window, but there are several types for that window. So okay, we've got a couple windows. We've got a couple doors. But, if you think about what should be included in a project template, try and think of the things that every building is going to need. Or, failing that, we can fall back on our familiar 80/20 rule. If 80 percent of your projects are going to need this item 80 percent of the time, then it's probably a good idea to include at least one or two examples of that directly in the template.

Now, why wouldn't you do that? Well, the downside that's often cited is things like file size. Sometimes folks don't like to start a project that starts off being 40 or 50 megabytes before they've even added a single piece of geometry. Well, there's a good argument to be made for both cases, for both sides. I think probably for most of us, the solution lies somewhere in the middle. That we can find a balance between including the right collection of items in our template for those situations that we use all the time, and not overloading it with every possible thing.

For example, if I go to the Door command, I do have three door families already loaded in here. I've got a glass door, a single-flush door, and a single-flush door with a vision panel. I don't have a double door. Now, double doors are very common in buildings, so you could argue, "Well, we have a lot of double doors. "So, we should have a double door in our project." So I would go to Load Family, I could go to the Doors folder and you could see that there's a variety of double doors here. Now again, you could say, "Well while we're at it, "why don't we just hold down the shift key "and take in all of these items?" Well again, the minute I do that, I'm going to maybe unnecessarily increase the file size to a point where it might be undesirable for the end users.

It might swing the pendulum the other way and kind of defeat the purpose. So, you can go through these sort of systematically, and for the kind of work that you do, you could probably make some pretty easy decisions about whether they should be included or not. If I do mostly hospitals or commercial buildings, then I probably don't need too many of these paneled bi-fold doors. But I might want the curtain wall doors, for example, or the flush doors are probably useful in any kind of project. So, I probably want to include those. But, maybe I don't need the overhead, sectional, and rolling doors unless I'm doing industrial buildings.

So, you can kind of make some decisions based on the kinds of work that your firm does. And then load in the appropriate kinds of doors. The rest of them you just leave in a library somewhere and let users click Load Family when they have a special case. Now, in that same vein, if you think about any building you've ever been in, chances are there were some plumbing fixtures in there. There's probably a toilet room. And you probably need a toilet and a sink. But if I go to the Component command and I open up the list, I've got a couple pieces of furniture, a parking space, and a tree. There are no plumbing fixtures loaded in this template that I started from, which was the original Autodesk template.

So, you could argue that maybe that was a bit of an oversight and we should include some basic plumbing fixtures, like a toilet and a sink maybe. So, this is basically the thought process that I want you to go through. I want you to think about not only what seems logical. You know, every building's got a toilet, Every building's got a sink. Every building's got a door and a window. But also think about the kind of work that your firm does. Well, we do most commercial buildings so we're going to focus on commercial-style elements. We do mostly residential buildings, we'll focus on those kinds of elements. And you can bring in an appropriate mix of components and have them pre-loaded in your template.

For the rest of them, you just want to make sure they're easily accessible somewhere on your network server or on people's local hard drives, so that they can find easy access to those items when they need them.

12/11/2014
Creating a robust collection of content is critical to any architectural design firm. This course considers the issue of content as it pertains to your project templates. Should content be preloaded in the templates, or should it be provided externally and loaded when needed? What goes into detail sheets? Which families should you include? How should line weights and object styles be set up? And what happens to your finalized template when you upgrade Revit? Author Paul F. Aubin explores these issues and many others in this course, where he discusses the role that a good content strategy plays in building your office's standard Revit project template file.