Using the Ribbon and the QAT 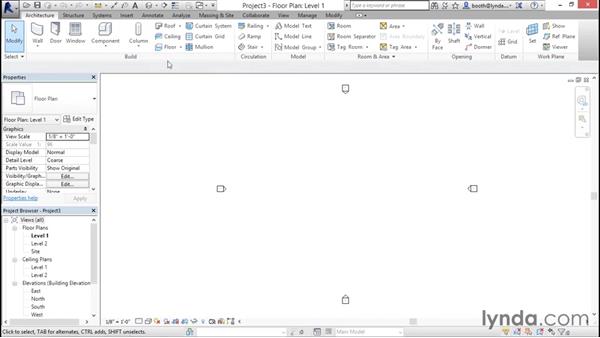 In this movie we're going to talk about two primary interface elements in the Revit user interface: the "Ribbon," and the "Quick Access Toolbar." Now, the "Quick Access Toolbar" is displaying currently, but most of the tools are grayed out, and the "Ribbon" is also mostly unavailable, so in order to talk about these two interface elements, we really need to have a file open in the background. So I'm just going to click the "Architectural Template" link here, and just create an empty architectural file. Now, as you can see, the interface changes when you do that, and across the top of the screen, is where we find the "Quick Access Toolbar," at the very top, and then beneath that, the "Ribbon", which is organized into tabs starting with "Architecture" on the left, and ending with "Modify" on the right.

So let's start by talking about the "Ribbon" a little bit. The "Ribbon" is really the primary interface element that you have in Revit, and all of the commands that you're going to access in the software are located somewhere on the "Ribbon." Now I'm on the "Architecture" tab to start off with. You may not have exactly the same tabs that I do, it depends on which version of Revit you have installed, but if you have the Suite version, you'll have "Systems" and "Structure" tabs as well. If you just have Revit Architecture, you might not have the "Systems" tab, for example. But you'll always have things like the "Insert" tab, the "Annotate" tab, so there are some common tabs that appear in all versions of Revit.

Well back here in the "Architecture" tab, let's just take a look at the organization of the "Ribbon." The "Ribbon" is organized into what we call "Panels." So the first "Panel" you can see here is the "Build" panel, and it encompasses all of the buttons and controls that would allow you to create things in your Revit model; architectural elements, so we've got walls and doors and windows all on that "Build" panel. There's also the "Circulation" panel, and the "Model" panel. And as you can see, that each one of them groups like commands together. Now, if we scan over a little bit further, there's a panel over here called "Room and Area," and you can notice that it's got this small little dropdown arrow next to it.

Now that doesn't occur on some of these other panels. And notice that this one, when I highlight it, it actually highlights in a bluish color, these don't. Well this is actually what we call an expandable panel. So when you click that, you'll see that there's actually some other buttons stashed away underneath that expandable portion of the panel. So these are less frequently used commands, and they kind of tuck them away under this little expandable portion. So be on the lookout for those. Now another thing you want to be on the lookout for, and I'll have to switch tabs to show you this, is, for example, if I go over here to the "Annotate" tab, sometimes, you'll have a small little icon that appears right here. Now this is the "Text" panel, and you'll see that when I hover over this little icon, it says, "Text Types." Now this is called a dialog launcher, and it's called that because if you click on it, it actually launches a dialog, in this case, the "Type Properties" dialog, where you could configure things about your type properties.

Now I'm not going to change anything there, I'm just simply going to click "Cancel," but I just wanted you to be on the lookout for these small little dialog launcher icons, and they do occur in other locations as well: here's one on the "Insert" tab on the "Import" panel. Now let's go back to the "Architecture" tab, and talk about the different kinds of buttons. Even with all these buttons and controls, really everything on the Ribbon boils down to three basic kinds of buttons. The simplest form of button is what you see here with like the "Door" and the "Window" commands: when I highlight it, the button highlights, and if I click it, it just does one thing, it launches the "Door" command.

Now over here on the "Model" tab, I have another kind of button, which is actually called a "Dropdown" button. So, here, when I highlight this "Model Group" command, and click it, instead of it running a command, it actually opens up a little miniature menu, and you can see that there's several items on this menu. And then when you choose any one of these, they would behave the same way as the "Door" or "Window" button did. It would create a group or load a group, and so on. Now, over here on the "Wall" command, you're actually going to see a combination of the two. The top half of the button, if you click it, just runs the "Wall" command.

Now if you've gone ahead and clicked it, I'm going to just simply click this "Modify" tool here to cancel that command without doing anything, and then I'm going to show you the second half of that button, the dropdown portion of it, which actually expands out a little miniature menu. Now I should point out that a lot of times whenever people see this little dropdown, they always click it, and there's nothing really wrong with doing that. This first item right here, is exactly the same as this item here. So if you know you want to create an architectural wall, you can actually just click the top half of the button without using the dropdown.

But if you use the dropdown, no big deal, it's just an extra click. Now any of these buttons and controls that you see, can be added to the "QAT" or the "Quick Access Toolbar." Now that's that toolbar that we see up there at the top of the screen. Now there's already some buttons here: we've got "Open," we've got "Save," we've got "Undo" and "Redo," but we've got a series of other commands over here as well. You can actually add any of the commands on the "Ribbon" to that "Quick Access Toolbar" by simply right-clicking them. So, for example, if I wanted to add the "Ceiling" command to the "Quick Access Toolbar," I could choose this item, and you can see it adds that button to the toolbar.

Now you can see that I'm not going to have much room here before I run out of space if I start adding a lot of commands, so it's actually possible to right-click anywhere on the "Quick Access Toolbar" itself, and choose this item here to show it below the "Ribbon" and it will move that "QAT" down underneath the ribbon, and you now have all this space over here that you can add commands to. So if you like to use the buttons, but you don't like having to switch "Ribbon" tabs, this can be a nice way to do that, because you can add your favorite commands to the "QAT" and move it down here, so that you have room for them all.

Now at the very end of the "QAT," is this little dropdown, which offers you another way to customize the "QAT," so, for example, one of the things you could do is come down here, and choose this "Customize" option, and you can see that this dialog allows you to actually start grouping the commands, and you can even incorporate these little separators here, in between groups of commands, and they show up here in the background as these little vertical lines, which just makes it a little bit easier to kind of visually group the different commands. Now I'm going to go ahead and cancel this, and I'm going to remove that "Ceiling" command that I added, and then I'm going to move this "Quick Access Toolbar" back up above the "Ribbon" and just kind of reset myself, but feel free to do any of those customizations I showed you if it suits your workflow a little bit more closely.

So the "Ribbon" is your primary user interface element in Revit. All of the Revit commands are located there. And then the "Quick Access Toolbar" just provides you shortcuts to many of your most frequently used commands, and you can actually customize that to suit your own needs and preferences.

5/28/2015
Take your Revit skills to the next level with Revit Architecture 2016. This course, recorded entirely in metric units, teaches you the techniques you need to complete solid architectural projects in Revit 2016. First, get comfortable with the Revit environment, and learn to set up a project and add the grids, levels, and dimensions that will anchor your design. Then author Paul F. Aubin helps you dive into modeling: adding walls, doors, and windows; creating and mirroring groups; linking to external assets and DWG files; and working with floors, roofs, and ceilings.

Paul also shows advanced techniques for modeling stairs, complex walls, and partially obscured building elements, as well as adding rooms and solid geometry. Finally, discover how to annotate your drawing so all the components are perfectly understood, and learn how to output sheets to DWF, PDF, or AutoCAD.
Topics include:

Video: Using the Ribbon and the QAT