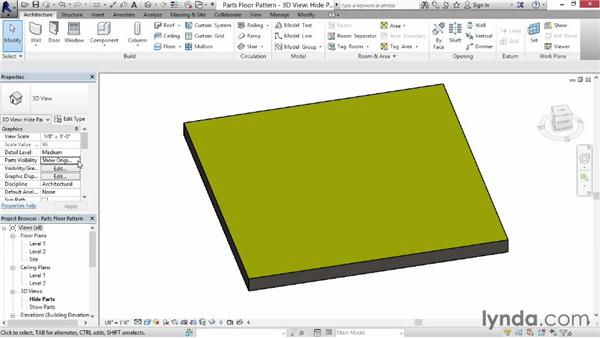 Revit's Parts feature allows us to take elements in our building model, and break them up into smaller components, or parts that represent how they will actually be constructed. It was primarily intended for a designer or an architect to be able to create a design intent model, that then transitions into the construction phase, without requiring wholesale remodeling of the major building elements. Using this tool, a designer can focus on the building form, spatial relationships, and overall materials instruction. The model can then be passed on to engineers and contractors.

Who can further articulate the model to indicate the actual panelization, concrete pours, or other more detailed modeling task, without actually destroying the original model. In this video, we will take a high level look at the Parts feature and talk about which elements can use Parts in Revit. So let's look at a really simple example. I've got a 3D view of a building model open here on screen and if we strip away the building model itself and take a look at another view that just shows the floor slab on the first floor. This might be how the architect would create the floor slab.

It would be this single, continuous object like so, that represents the floor slab. That's the way they would think of it. But the contractor is going to want to pour this element in multiple sections. So, rather than deleting this slab and recreating it individually as separate slab elements, they can use the Parts feature, and I'm going to turn that on right now, show the parts here. And break up that existing floor slab into multiple sections, and you can see each one of these would highlight as a separate element that's called the part.

So, that's kind of the overall intent that Autodesk had in mind when they designed this feature, but it's not the only way that we can use it, I have a few other examples I'd like to share with you here. So, it might be something as simple as taking a wall assembly, and talking about how it goes together. So, by turning on Parts, it might look something like this, where we can actually start to peel back the individual layers and talk about how this wall is put together. And in fact, if we wanted to, we could even begin to start labeling those parts to indicate the various materials. But we could push this feature even a little bit further, and use it to start indicating finishes.

So, here I just have a really simple floor slab, and by using Parts, we could actually indicate a very elaborate floor pattern that's part of that floor assembly. And you could see that each of those individual materials is a separate selectable part. So, let's back up for a minute, and talk about the elements in Revit that can actually use Parts. So to start with, it can be any of our layered hosts. Elements like, walls, floors, roofs, ceilings, any of the objects that are broken up into individual layers. Now, each of those have their own little caveats, but we'll talk about those in a minute.

We can also use Parts on structural foundations, fascia elements, which is also another kind of a layered host, and even things that are more like sweeps, like gutters and wall sweeps. And there are some loadable and in place family elements that would also allow for the use of Parts. That would include things like Columns, Structural columns, and Structural framing. Now, if you look in the help file, you can find out more details on each of these. So here in this model, I just have a really simple model that I've called Parts Elements. So let's take a look at the 3D view on this, so we can have a better understanding of what we're looking at here.

Here I've got some walls and some footings and roofs and so on. These are all the various elements that were noted in our slides a moment ago. The way you can tell whether an element can use the Parts feature, is to simply select it and then look at the ribbon. So up on the Modify ribbon, on the Create panel, we have our Create Parts button. If that button lights up, then you know that this object can use Parts. So, of course, that's going to be true of any of our walls, our foundation here, our roof element. Another foundation over here. Even floor slabs.

Floor slabs have some caveats. If you use a floor slab that uses the shape editing feature, and it has only a single layer, then it can use Parts. However, if it has a multiple layer structure like this one, it cannot use Parts. So, again, you'll find more details on what can and can't use Parts in the help system. For example a, standard layered wall will work. But a curtain wall or stacked wall would not. So there definitely are some limitations. So overall, most of the major building components that are going to represent the overall structure of the building, are going to support the Parts feature.

In the next several movies, we'll start looking at how we can actually use the feature to create parts in your Revit models.

3/11/2014
If your job requires working on Revit models created by someone else, then you have probably run into situations where portions of the model need to be reworked. Perhaps you're a subcontractor or an interior designer who needs to accurately convey finishes. Traditionally tasks like these would require a good deal of time, but with the three unique construction modeling tools in Revit, you can now add the details and refinements you need without rebuilding the entire model. Paul F. Aubin shows how model elements can be broken down into parts and articulated with their own finishes, materials, and other details. To assist in documentation, Paul explores assemblies: detailed drawings of isolated portions of the model. And with the Displace feature he shows how to create compelling "exploded view" illustrations to convey how things fit together.
Topics include: