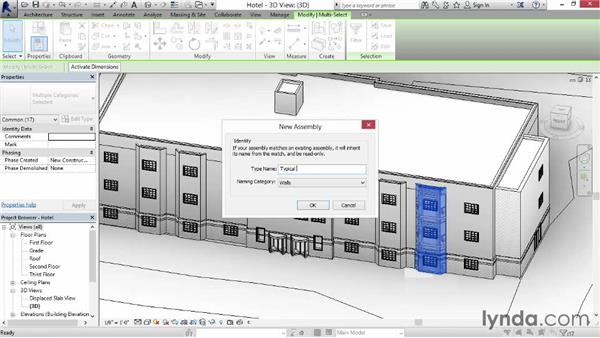 Assemblies allow you to take several items, group them together into a named assembly. The assembly will show as a separate element on the project browser, and it behaves a little like a group, and a little like isolated elements. You can use assemblies to articulate an area of work in your project that are similar and require more detailed attention. One of the major benefits of assemblies is their ability to be isolated, viewed and documented separately from the rest of the project. So I'm in a file here called hotel. We're going to select one of these bays here on the exterior of the building and turn it into an assembly.

Many objects are eligible to be part of an assembly. I don't have the complete list but it's really easy to tell when an object can be part of an assembly or not by just simply selecting it. And then looking up on the ribbon to see whether or not the create assembly button is available. So most of the overall building elements are available for assembly. Certainly walls, doors, windows, most system family stores, columns, many objects. There are a few objects that are not eligible. Things like stack walls, curtain walls, unfortunately, because I think curtain walls would be really beneficial to have.

As part of an assembly so hopefully in some future release Revit will give us that. You can't put groups in an assembly and you can't put other assemblies in an assembly. So there definitely are some limitations and you can look in the help file to get a little bit more detail on that. What I'm going to do is start by selecting this area here. I'm going to click and drag a little window selection here. And try and select that entire bay. Now, I did get some elements in the background that I didn't want.

So, if I hold down my shift key, and drag my wheel here, I can spin to a different vantage point. Then hold the shift key, and with a crossing selection, it looks like I'm selecting everything. But what I'm actually doing, if you look carefully at my cursor and see the minus sign. Is I'm actually removing items from the selection. And then I'll spin this back around again. Now the other way that I could do this to be sure that I've got the right thing selected, is to isolate elements.

So if I come over here to the pop-up found on the view control bar And I'm going to say let's isolate the current selection. You'll see that I do still have some stuff across the model selected here that I don't want. Now it's a little easier to remove those from the selection. Then when I reset the isolate mode. I'm back to here, and if it drops your selection, you can just simply right-click and do select previous. And it should remember what I just had selected.

Now, if I look over here, it says that I have 16 elements selected, and if I look carefully down here at the bottom, it looks like I'm missing this one wall right here, so I'll just hold my control key and select that manually. And so now it says I have 17 items selected. Now, there are one, two, three four walls stacked on top of each other times three for the shape of the bay. That's 12, 13, 14, 15. That's the three windows. 16 is the sweep here at the top for the parapet cap and then finally there's a small roof back there, there's your 17 items.

So if you know what quantity you're expecting then it could certainly be helpful to verify that over on the properties. So, now that I have these 17 items selected, I'm just simply going to come up here to the. Modified tab and create an assembly from those items. Now when the new assembly dialog opens, it's going to be asking us for a name, and there's going to be a naming category listed right here. Now this list of categories, is actually the items that we have in the selection. So once again, I have walls and suites and rooms and windows in my selection.

So I can actually base my name and my categorization for this assembly for any one of those categories. So usually you kind of choose the category that seems to make the most sense for you. So in my case. I have mostly walls in this selection. So I think the walls category seems like a better choice. And I'm going to call this typical bay. Now I'm going to click okay here so you could name it anything you like. And what'll happen is if I deselect on screen and then move my mouse back over here, you'll notice that when I highlight it, the entire bay now highlights and the tool tip tells me it's in assemblies.

So let me demonstrate. If I went to the bay right next to the bay that I just created and make a similar selection, and I will again use the same basic selection method I'll isolate it. Spin around, shift key remove. And then before I get out of here, I'll check my quantity, it's 17. So I'll make an assembly before I leave the isolate mode. Go to walls again. This is going to choose a whole new name, which seems a little bit strange, but let me just go through with this and show you.

I'll just call this bay 2 for the time being. Let me go to reset, okay? Now, suppose I were to select the third bay? Assemblies have a really interesting behavior here if the selections are exactly the same. So I'm making my selection here. I've got my 16 elements let's see which one I'm missing. Isolate elements, looks like I'm missing that wall down at the bottom there. So let me reset, select previous, grab that wall right down there.

So now it says 17 elements again. Now, when I try and make an assembly from those 17 elements, set the category to Walls, notice that typical bay becomes the name and it grays out. It says right here, in this little note. That if you're assembly matches and existing assembly, it will inherit its name from the match and become read only. So that's what it's doing right here. Now why didn't it do that for the second one that I created? Well it turns out that this has to do with how I duplicated these bays when I originally created them in If you copy then it sees it as the same, but if you mirror, it sees it as different.

So when I created this bay and then mirrored it over here, it became different. Had I copied it, Revit would have seen that as the same and I would now have 1, 2, 3 assemblies that were the same. As it currently stands if we look down here, I have typical bay with two instances. So if I right-click, say select all instances, I have two instances of typical bay. And if I right-click and select all instances, I have one instance of bay two.

So if you know that going in, even though it's convenient to do mirror if your goal is to have all of these bays be the same. Then you might want to avoid mirror for these items and choose copy instead. And in fact if you want to expirement with this, I'll leave that to you as an exercise. On this side of the building that's exactly what I did. Is I took these bays and copied them. So you should be able to create a single bay, and then get the other three as the same assembly, by just simply creating the assemblies and it will sense that they are copies.

So to create your assembly, it's a simple matter of selecting the objects and then using the create assembly button. But we have that interesting little behavior that if the objects are the same, then Revit senses that and creates another instance of the same assembly instead of creating a whole new one. So, Takes a little bit of getting used to because that's a different kind of behavior than what we're seeing elsewhere in other features in Revit, but could be a very valuable benefit because later if you change the main assembly, it will actually have the impact across all of the instances.

3/11/2014
If your job requires working on Revit models created by someone else, then you have probably run into situations where portions of the model need to be reworked. Perhaps you're a subcontractor or an interior designer who needs to accurately convey finishes. Traditionally tasks like these would require a good deal of time, but with the three unique construction modeling tools in Revit, you can now add the details and refinements you need without rebuilding the entire model. Paul F. Aubin shows how model elements can be broken down into parts and articulated with their own finishes, materials, and other details. To assist in documentation, Paul explores assemblies: detailed drawings of isolated portions of the model. And with the Displace feature he shows how to create compelling "exploded view" illustrations to convey how things fit together.
Topics include: