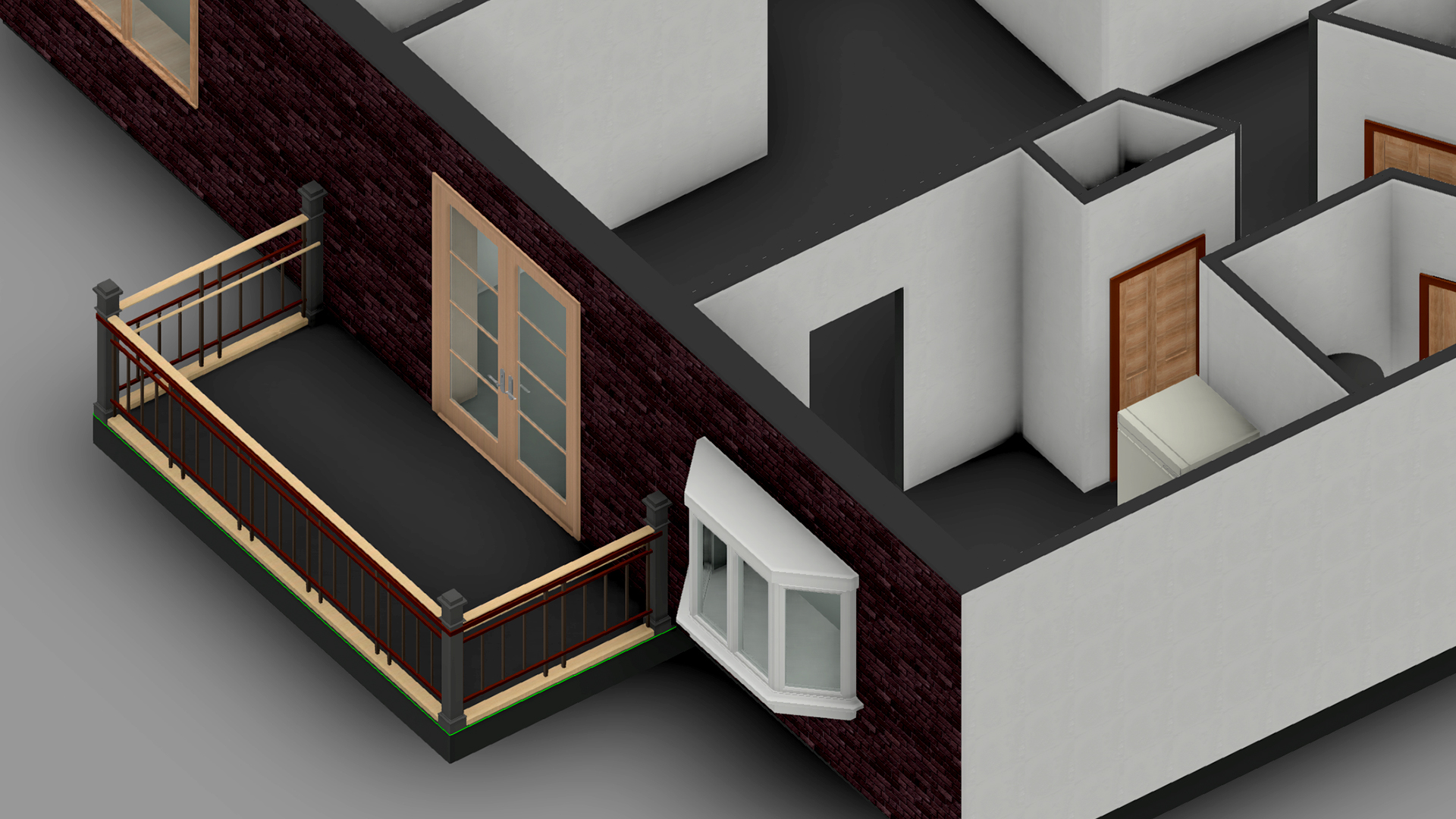 - [Narrator] In this video let's dive into the wall command a little bit and kind of look at some of the most common settings that are available. Walls, after all, are the most basic element of any building project so it's a good idea to get as comfortable with them as you can. So, I'm in a really simple file for this purpose and on the architecture tab I'm going to click the wall button. So, several things will change on the interface when you do that. So, we'll be taken to the modified tab and the name of the modify tab will change to modify place wall indicating that we're now in wall placement mode. Beneath the ribbon we'll see the options bar change also to modify place wall and several wall specific options will be available.

We'll also see wall specific options on the properties pallet and we'll be able to interact with those and then finally, down at the status bar in the lower left hand corner, there'll be a prompt there that says click to enter wall start point indicating what we're supposed to do next. So, let's go ahead and click that first start point and then I'll start moving in the direction that I want to draw the wall. Now, if I go directly horizontal it'll give me a tip that kind of tells me that or a directly vertical, it'll kind of tell me that. But, if I'm a little bit off angle then what the prompt actually will say, and you might have to look at the status bar to see it, it'll say enter wall end point.

So, in other words, when you're drawing walls that you just click, click, you're placing them point by point almost like drawing lines. Now, if I click the second point I get a wall but notice that I'm still in the wall command. So, you're able to draw as many walls as you want within the same wall command. Furthermore, notice that the new wall is actually attached to the first one. Revit calls this chain so if I click an end point and click and end point and click an end point what I'm doing is creating a sequence of walls in chain.

Now, there's a checkbox on the options bar that controls this behavior and if you were to uncheck that you'd be drawing each wall individually start point, end point then start point, end point. So, usually it's a pretty good idea to leave chain checked because it's a faster way to work. Now, if you're done drawing the wall you can simply cancel the command and I'll do that with the modify tool and that'll take me out of the command. Well, what if I want to stay in the command, say I'm drawing a chain, but I want to draw another chain and just disconnect it from this first one.

So, kind of keep that in mind and that'll make you a little bit more efficient when you're drawing walls. Let's go back to the wall command and now look at some of the additional draw options. So, all of these walls we drew with the basic line option in here which was the default. But, you can also draw rectangles. You can also draw polygons. If you want to change the quantity of sides you can do that right here on the options bar and draw a second polygon. There's actually two ways to draw polygons inscribed or circumscribed. You can draw circles.

You can draw arcs, either from the center or from the end points. Let me demonstrate this one for you. This one is actually called start end radius and a lot of times when folks first use this they do it wrong 'cause they try and go along the curve. So, let me show you the way this one behaves. Start point, end point. It looks like you're drawing a straight line but after you click the end point then you can actually see that the final point is actually setting the amount of curvature. In other words, the final point is setting what the radius is. Now, I could just simply eyeball it anywhere I want or I could type in a value.

So, in this case I'm going to type in twelve thousand millimeters and press enter and now that arc that I drew has a radius of exactly twelve thousand millimeters. Now, notice that with arcs it works just like lines. You can continue drawing in chain. So, I could pick a second end point and now I'm drawing a new arc and you can draw that arc anyway you want and it will stay selected to the previous one in chain, or if you pay attention to the prompts on screen, notice that it will try to snap to useful stuff.

So, in this case it's trying to snap tangent along the curve and we can make nice smooth curves by drawing multiple arc segments that are flowing one from the next. So, let me go ahead and escape twice to get out of there and let's clean up some of these doodles now and get rid of all this stuff. So, I'm going to click from the right to the left and drag through all of the walls to select and delete them. Trouble is, if I press delete right now it's going to warn me that I'm also going to delete one of my elevations. So, let's click cancel.

Don't pick OK there and that's because I've got this element selected as well. So, what you can do is go to the filter button here, uncheck elevations and views. That will leave only walls selected, click OK and now you can press delete. So, now what I'd like to do is talk about the height parameters of walls. So, all of those other doodles were just about the shapes and whether they were in chain or not, but if I go back to the wall command, notice that on the options bar you will also have some height parameters. So, right here we're placing the wall by its height at an unconnected height of eight thousand millimeters.

You can also see those settings phrased similarly on the properties pallet. Instead, here what it says is the base constraint is at level one. The top constraint is unconnected and the unconnected height is eight thousand. So, if I click two points to place that wall it's eight thousand millimeters tall. Now, I'm going to press escape one time to break the chain, change the height to something else. Let's try seven thousand and draw a second wall.

I'll press escape one time to break that chain and now let's talk about an alternative way to set the height of the wall. So, this wall's eight thousand, this wall's seven thousand, but those numbers aren't connected to anything. If instead you want to associate the heights of your walls to something valuable in the project, you can use the top constraint parameter here and actually attach the tops of the walls to other levels within the project. So, this next wall I'm going to draw, I'm going to tell it to go up to level two.

Notice that that grays out the unconnected height and makes it three thousand. Let me do a segment. Press escape, and let me do two more up to level three, escape and up to level four. And, this time I'll escape twice. So, now we're working in plan, we really can't see the result of any of those heights so let's scroll down here on the project browser, locate the south elevation, double click to open it and now you can see the result of all those heights.

This is the eight thousand millimeter wall. This is the seven thousand one and then, these three are attached to the various levels. So, with any of the unconnected walls, if I want to change the height, what I do is I just simply come in and put in a new value and when you apply that change that wall will change height. So, sometimes that's going to be useful to do when you want to just set the height numerically to a specific value. But, the advantage of using the levels is that because the wall is actually associated to this level, should this level height change any walls that are attached to that level will also change automatically.

So, I'm just going to simply drag this level to show you that and notice that the height of this level automatically stayed connected to level three when I made that adjustment. So, imagine in a large project where you have lots of walls, simply changing the floor to floor height between two levels will automatically change all of the walls on that level, so that could be a very powerful way to manage the heights of your walls. Now, I encourage you to experiment further. Not only with the height parameters but with drawing the walls and sketching them and seeing the different shapes that are available.

Take as much time as you need in this file to experiment because as we said at the beginning, walls are the most basic element of any building so the more comfortable you feel with the wall command the more confident you'll feel going into more advanced topics in revit.

4/13/2017
Take your Revit skills to the next level with Revit Architecture 2018. This course, recorded entirely in metric units, teaches you the techniques you need to complete solid architectural projects in Revit 2018. First, get comfortable with the Revit environment, and learn to set up a project and add the grids, levels, and dimensions that will anchor your design. Then author Paul F. Aubin helps you dive into modeling: adding walls, doors, and windows; creating and mirroring groups; linking to external assets and DWG files; and working with floors, roofs, and ceilings.

Paul also shows advanced techniques for modeling stairs, complex walls, and partially obscured building elements, as well as adding rooms and solid geometry. Finally, discover how to annotate your drawing so all the components are perfectly understood, and learn how to output sheets to DWF, PDF, or AutoCAD.
Topics include: