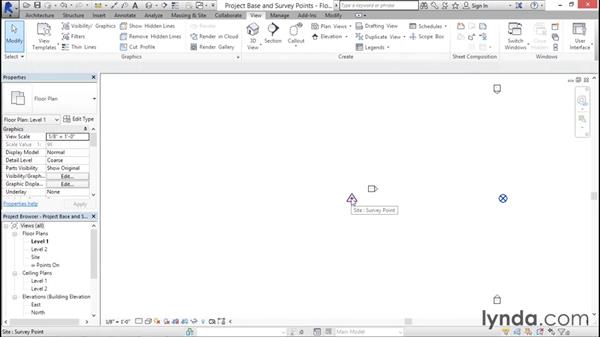 - A common question that new users ask when looking at Revit for the first time is, does Revit actually have an origin point? Now, this is a pretty logical question, especially if you're coming from other computer software, like AutoCAD or other CAD software like that where, not only do those programs have an origin point, but they're also very obvious on screen. You can see a grid and it's highlighted visually, and you can actually type in "0,0" into an interface somewhere and move objects directly to those locations. Well, the answer to the basic question, does Revit have an origin point, is yes, absolutely.

Revit has an origin point, and we're gonna discover where that is here in this movie. Now, the general answer is, it's right about there in the middle of the screen. But of course, that's not very satisfying. So let's talk about how we can see that a little bit more visually. There are two icons that we can display. I'm gonna display them one at a time. Now, whenever you want to display things in Revit that are not currently visible, you use the Visibility Graphics command. Of course, this will be no exception. I'll go to the View tab and click Visibility Graphics. But of course, I typically use the shortcut for this, vg, so that's another option.

You can just type the letters vg. And if you scroll down, you're gonna notice that all the categories are listed here. And it's beneath the Site category that we're gonna find the object that we're interested in. I'm gonna start with this one here, the Project Base Point. I'll check the box next to it to turn it on, and click Okay. What you'll see display on screen is this small little circle icon with an x through the middle of it. Now, this icon represents the location, a known location, in the project itself. So if I click on it, you can see that it's called Project Base Point and it's got some coordinates associated with it.

In the north-south direction we're at 0, likewise in east-west. And the elevation, which would essentially translate to the z, is also at 0. This is basically your x, y and z. You can see that everything says 0, 0 and 0. Now, you can actually move this icon. And, depending on the condition of this little paper clip next to it, it'll actually have a different impact on the project. If I were to actually just drag this thing, you can see those numbers changing interactively. So what I'm actually doing is relocating this point.

If I let go, you're gonna see not only the point move, but all the elevation symbols moved, as well. What I've actually done is relocated the project. I'm gonna do control z to undo that. The other way you could move that thing, and I'm gonna do that this way this time, to make is slightly more precise, is to actually type in a number right into that temporary dimension. I'm gonna put in 100. Now, the number you put in isn't terribly important. The idea that I've changed it to a new location is really all I'm trying to do here. Now, if I go back to vg and go back to that Site component, expand, and turn on this Survey Point this time, and click Okay, you're gonna see a second icon appear right here, which has this triangle shape.

Now, this is called the Survey Point. If I click it, you'll notice that its coordinates here say 0, 0, 0. But now, of course, the Project Point is 0, 100 and 0. So what's meaningful here is the distance between these two points. If you really stop and think about it, saying that something is 0, 0, without putting it into a broader context, is really not very meaningful or very useful. But saying that this is 0, 0 relative to a larger context is what's really important for our project.

So Revit gives us these two points and we can assign meaning to each of these locations. So, typically the Survey Point we think of as something on the site. Now, it could be a standard benchmark, like a city benchmark or a state or a national benchmark even. It could be, you know, a large tree that's been there for a long time. It could be a manhole cover, an iron pipe in the ground, whatever your civil engineer says is the starting point or the important point for the project. The circular point, the Project Base Point, that one's gonna be a meaningful point in the project itself.

Now, that could be the lower left-hand corner of the building, it could be the intersection of grids A and 1, really anything you like. Now, I don't actually have a building in this project, but if I go to this floor plan here called With Points On, you can see that I've got a couple walls in here to kind of illustrate what I'm talking about. And in this case, that Project Base Point is actually snapped directly to the lower corner of these three walls here. And now it maybe makes a little bit more sense, what happened when we moved this location point.

Now, if I change that number again, watch what's gonna happen this time. It moves a little bit closer back to the Survey Point. But notice it takes the building with it. That's the behavior you get when the Project Point is clipped. In other words, the behavior when it's clipped is, you are literally moving your project relative to the Survey Point. Now, let's say you actually wanted the origin point at this corner of the building, but you don't wanna actually move the building. Well, then you simply unclip that point and then move this point here, and it will actually snap to the other location.

And now you can see that the number has changed, but it did not move the building with it. So the distance from here to here is now 70.667. But the relationship that it has to your building project is totally different. You can see that it's the meaning that we assign to these points that's important. Is it more important to the project team that the lower left-hand corner be the Project Base Point, or the lower right-hand corner? Or some other location in the building? That's what you're trying to establish. Once you've decided what the meanings of those points are, and you've clued everybody else in on the project team, then you kind of leave them alone.

And that's what gives you the overall broader context in your project. Now, as we dig deeper into this in the movies that follow, we'll look at other examples of how we can really leverage this to our fullest advantage. 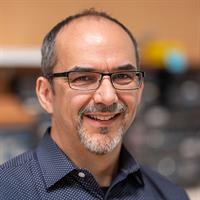 3/6/2015
If you are new to Revit (particularly if you are coming from an AutoCAD background), the approach Revit takes to coordinates, positioning, and origin points can be a little baffling. The trick is that coordinates, movements, and measurements in Revit are always relative to something else. In this course, you'll explore the Revit coordinate system and see how files relate to one another when linked. Author Paul F. Aubin also shows you how to set up shared coordinates, link files with shared coordinates, and maintain the relationship as the project progresses. If you have let the Revit approach to coordinates intimidate you, this course will give you the tools you need to begin using them with confidence.
Topics include: